Field Trip | Coming Together at Confluence 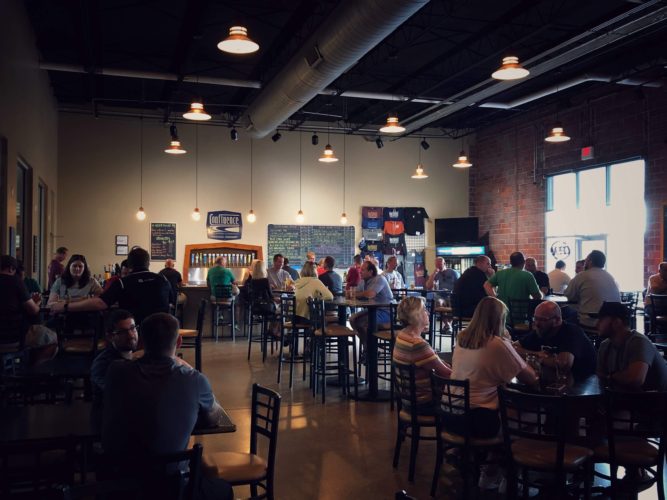 My brothers are visiting next week…where should we take them while they’re here?

I’ve had this, and similar conversations with my wife too many times now to count. Whether it’s a sibling, relative, or friend, one universal truth is that all out-of-town guests must be shown the *best parts* of my city when visiting. And for us, those spots often include Raygun, Gray’s Lake, Up Down, and el Bait Shop. Yet when it comes to showing off a prime taproom or brewery experience, one location repeatedly rises to the top of the list: Confluence Brewing Company.

With a solid core line up of beers, immediately recognizable branding, and an attractive (family-friendly) downtown location, no other brewery has become more synonymous with the city of Des Moines. 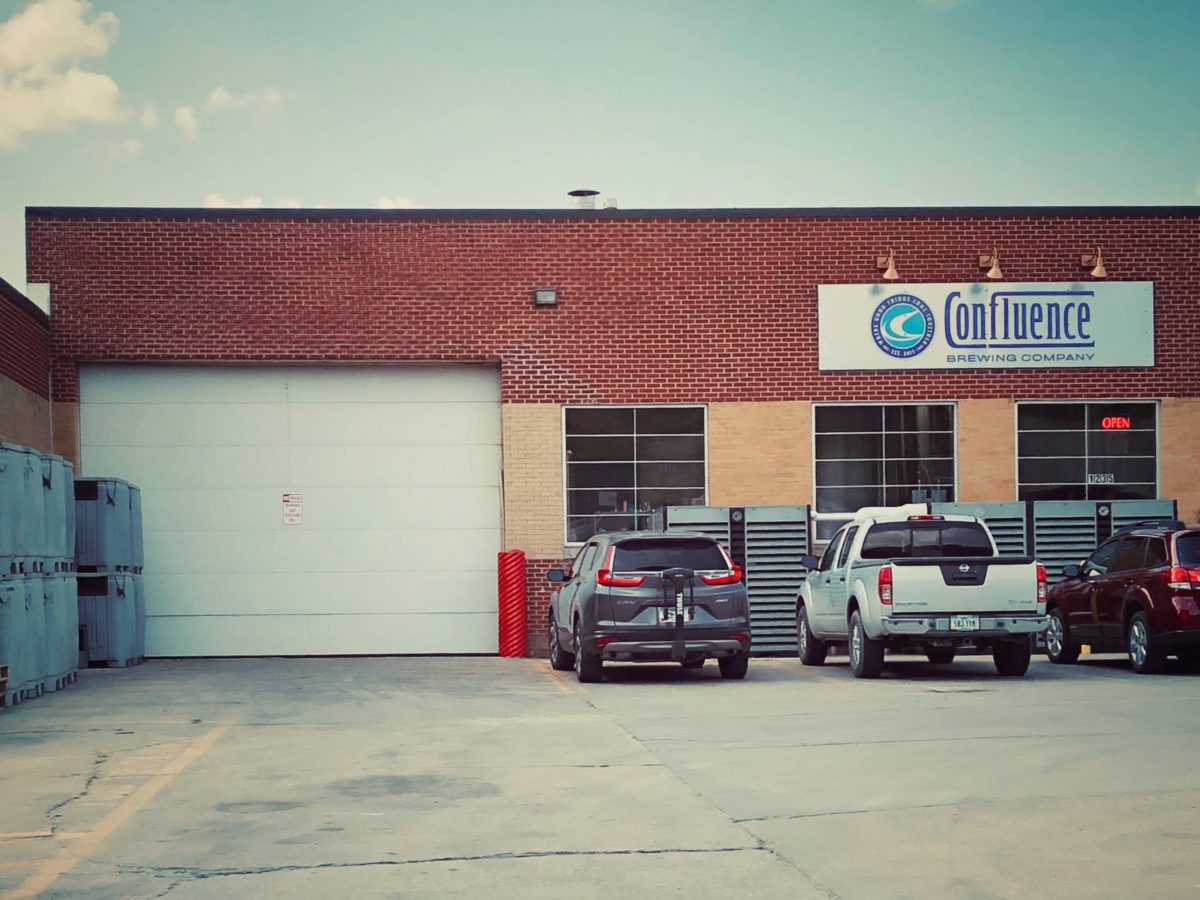 Stop me if you’ve heard this before: upstart brewery founded by local home brewer finds new home in shuttered industrial space. In this case, that home brewer was John Martin, who first hatched the idea of opening a craft brewery in 2004 with friend and fellow craft beer enthusiast Ken Broadhead. And that shuttered industrial space was just south of downtown Des Moines.

Yet even by craft brewery standards, Confluence would surely take home a prize for most unassuming industrial storefront. Located on a lightly used access road between a trucking company and a warehouse, Confluence Brewing Company has called the near south side of Des Moines home since officially opening in 2012. But if you didn’t know where to look, you wouldn’t know where to find it. 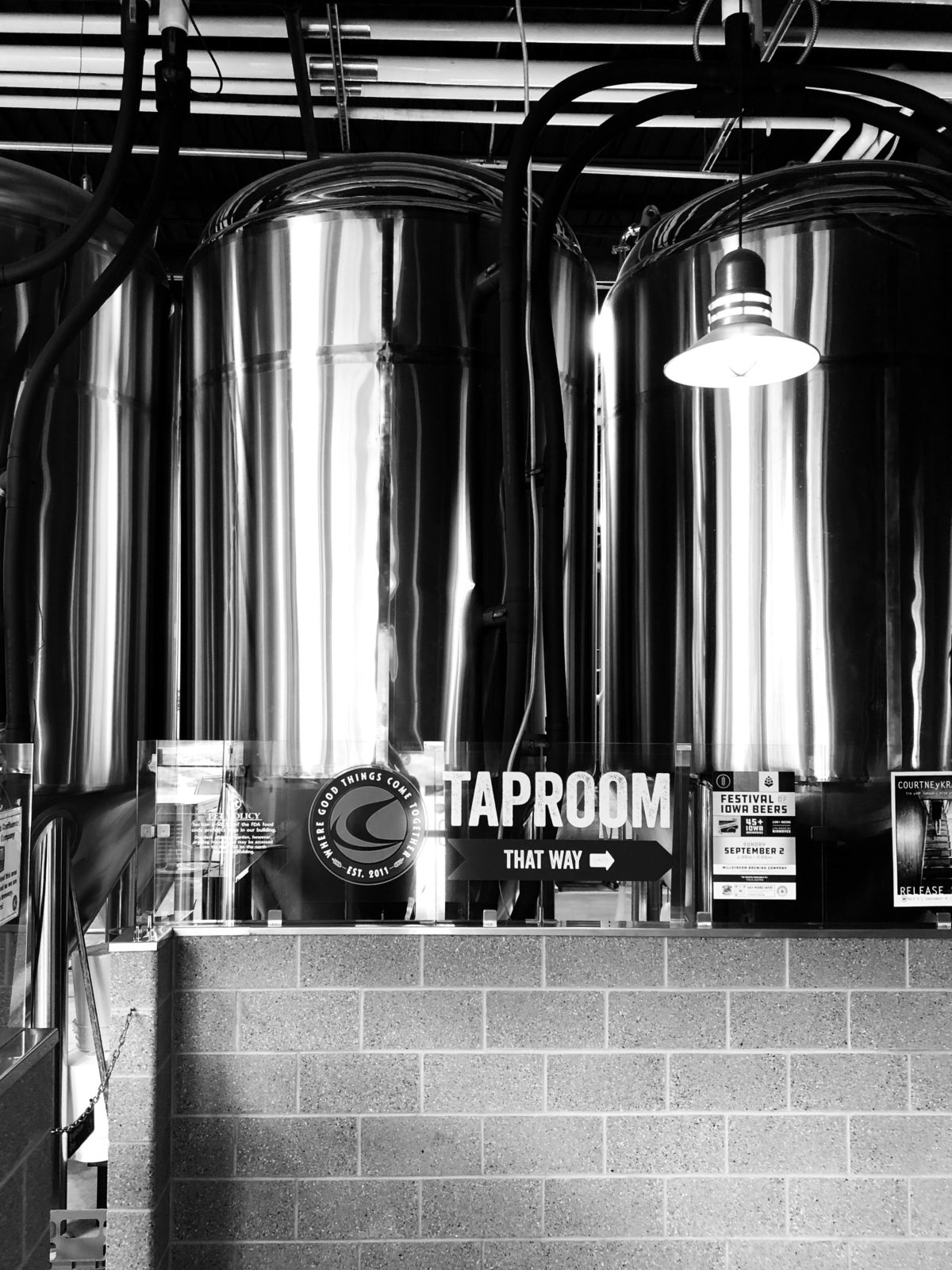 Whatever the brewery may lack in front, however, is more than made up for once you walk through the front doors and immersed into a full-on sensory assault. Towering stainless steel vessels. The smell of the mash. The heat from the boil kettle. The noise from the canning line. All separated only by a half-height brick wall. A narrow hallway leads past the brew house operations until you reach the Spartan, back-of-house taproom. 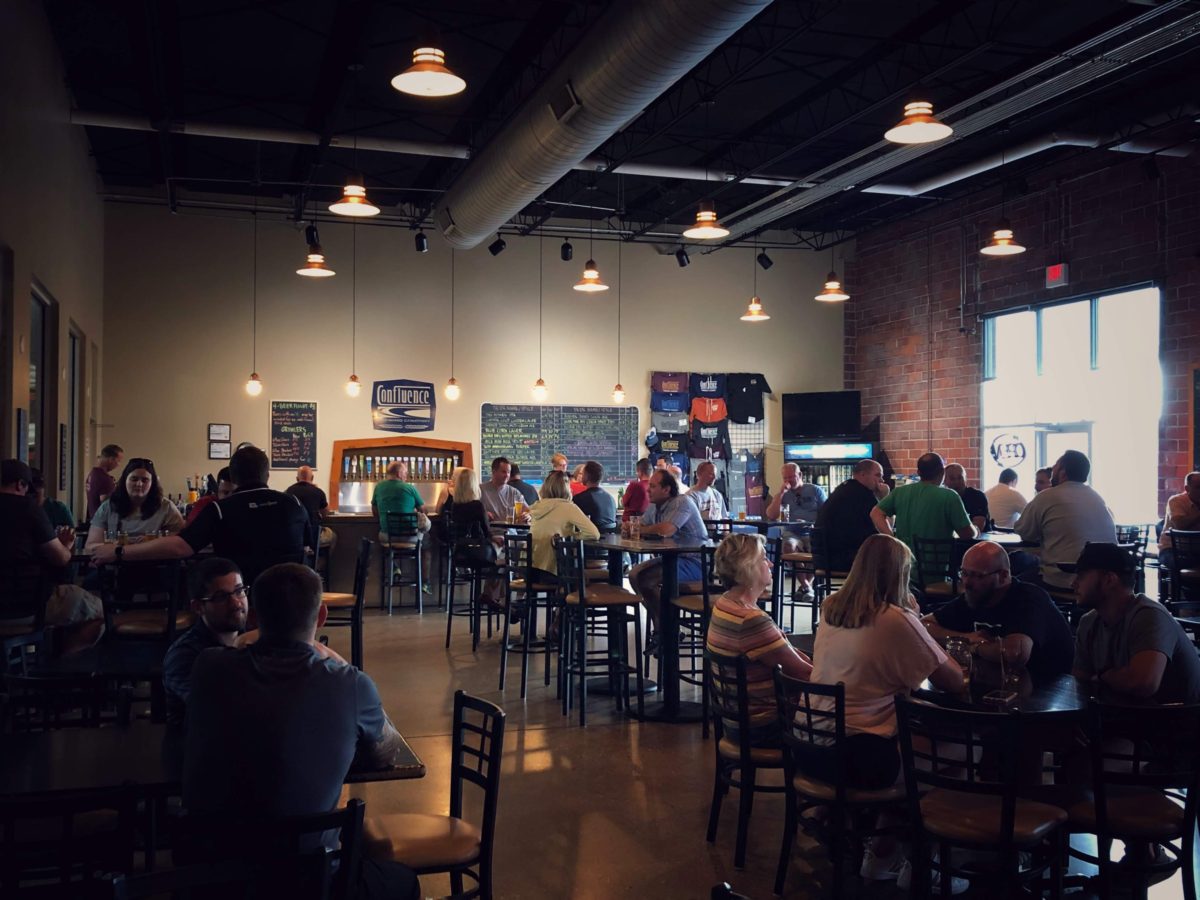 Outside, a wide, wood-framed deck overlooking a new patio and beer garden makes this spot a favorite for outdoor enthusiasts of all ages. And with a paved path to Des Moines’ most popular public park, access to the Meredith and Great Western bike trails has never been easier. To say that this helps Confluence can attract a crowd despite it’s location would be a massive understatement.

From beer names to brand placement, no other brewery in central Iowa has managed to capture the essence of locality and integrate its image quite like Confluence Brewing Company.

“Our tagline is ‘Where good things come together’,” John Martin, President and co-founder tells me, “referencing the two rivers coming together [the brewery is located less than a mile from the physical confluence of the Des Moines and Raccoon rivers at which the city was founded], but also extrapolating to the ingredients, people, ideas coming together in a good way.” 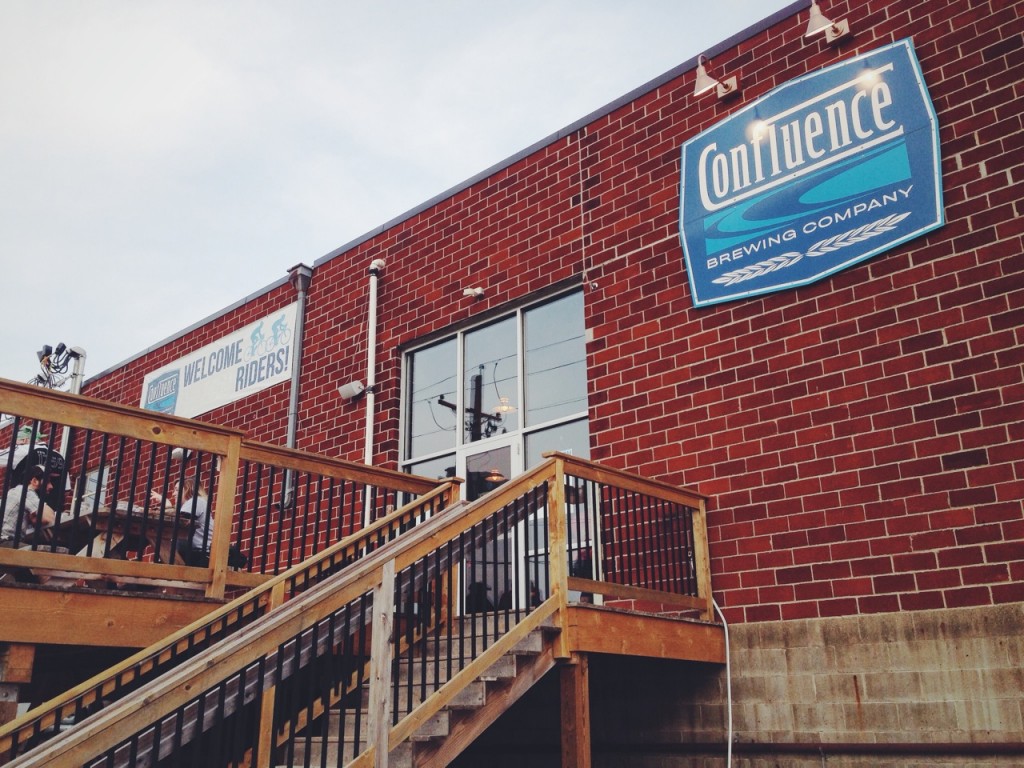 “We have had a lot of good “confluences” since we have opened,” John continued. “Many of them have been partnerships with local events, fundraisers, etc. We are proud to be part of the Des Moines business community and a supporter of our community.”

One of those partnerships include brewing up a beer with local sports talk radio personalities called Downtown Throwdown Pale Ale. Another beer, brewed to help raise funding for the restoration of an historic river bridge, lead to a fully funded project. Now the iconic green trusses of the Jackson Street bridge have become an integral part of the downtown bike trail system. 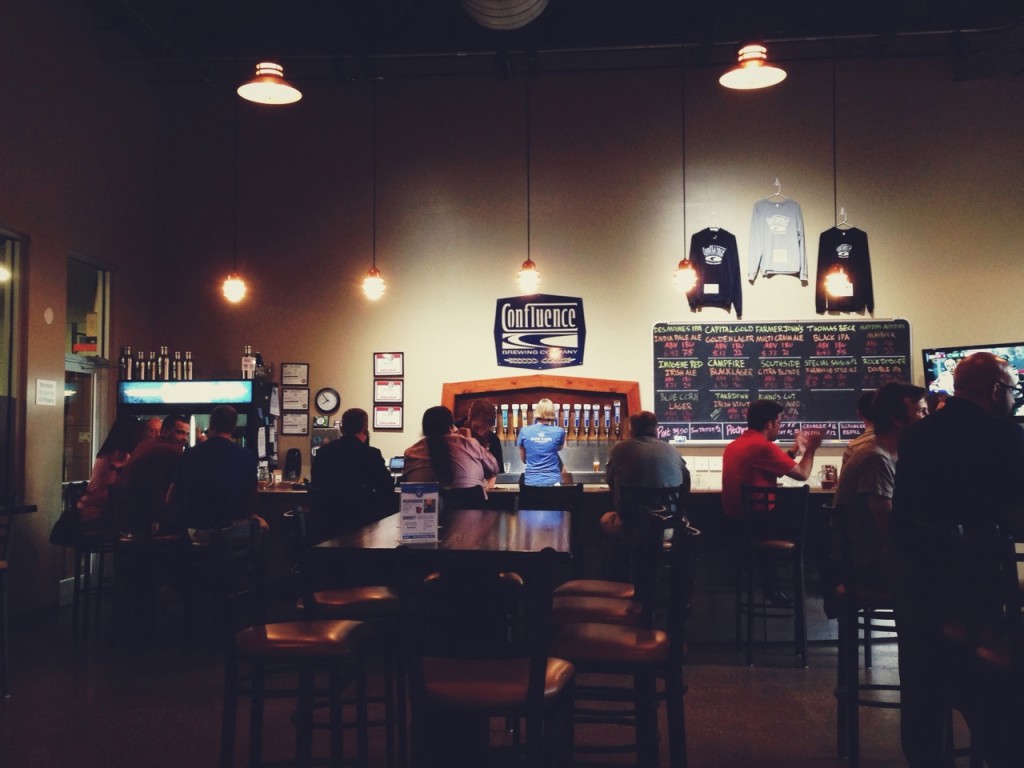 For all the love garnered by casual beer drinkers, local craft beer snobs enthusiasts have been slow to fully embrace the traditional variety offered by Confluence Brewing. You won’t find long release lines for bottles or ISO:FT forums seeking CBC cans. There is no doubt that Des Moines IPA or Capital Gold are great beers, yet for better or worse, Confluence always seems to take a back seat to other local breweries when it comes to hype.

With the introduction of a few new brews, like the revolving Extinction Event New England IPA series, those times may be changing.

“I originally wanted to have a rotating pale ale throughout the year,” John says. “This would be a way to try new hops, malts, etc. Instead, we have worked in a few pale ales over the years, such as No. 12 Rakau Pale Ale (brewed on 12/12/12 at 12*Plato), Barley and Me Puppy Pale Ale, Beaverdale Brick Amber Ale, JME, as well as Long Ride and possibly a couple other one-off beers.

“The Extinction Event series grew out of my desire to have our own Citra-forward pale ale/IPA,” John continues. “We wanted to get into the juicy/hazy IPAs as well, so we just worked on the recipe and came out with our ‘New England Style IPA’ in December last year.

“Brewer Josh Maxson and I discussed it off and on for about two years. Josh came up with the idea for the name and the idea to use different hop combinations. [The December batch] was the prototype for the series. We made some changes, did more research and the first Extinction Event beer was a redo of the prototype (Citra + Hull Melon). We learned more and applied that knowledge to the second and third batches. I am pleased with the appearance, flavor and aroma, but we are always trying to learn more and improve.”

The response to these new brews from Confluence has been overwhelmingly positive from both casual drinkers and hardcore craft connoisseurs alike. Over the summer, can sales of Extinction Event have outpaced any other seasonal or limited release previously offered.

“This is a very fun series for us as brewers to be able to experiment with different hop combinations for some awesome flavors. I’m excited that the beers have been received so well by the public. We are very excited to have a sought-after beer.”

What’s next for Confluence? For now, John expects to continue the series with new hop combinations and revisit a few of the more popular ones. “Look for Extinction Event Batch 4 with Nelson Sauvin and El Dorado hops. It’s set to be released on Friday, August 31st, just in Time for Labor Day!”

As for the future though, don’t expect any dramatic shift in quality or culture. “We wanted to be Des Moines’ brewery of choice,” John says towards the end of our conversation. With the consistent lineup of crowd pleasers plus the willingness to innovate and experiment, there’s no reason Confluence Brewing Company won’t be.

*20 BBL brew house with four vessels so that CBC can mash, lauter, boil, and whirlpool as separate processes. This allows them to start another batch before the first one is done and brew multiple batches in a day. The fermenters are mostly 40 and 80 BBL tanks (10 x 40 BBL and 4 x 80 BBL). All this is to say that Confluence produces a whole lot of beer.