From Craft Room to Taproom – Do Kids Belong in Breweries? 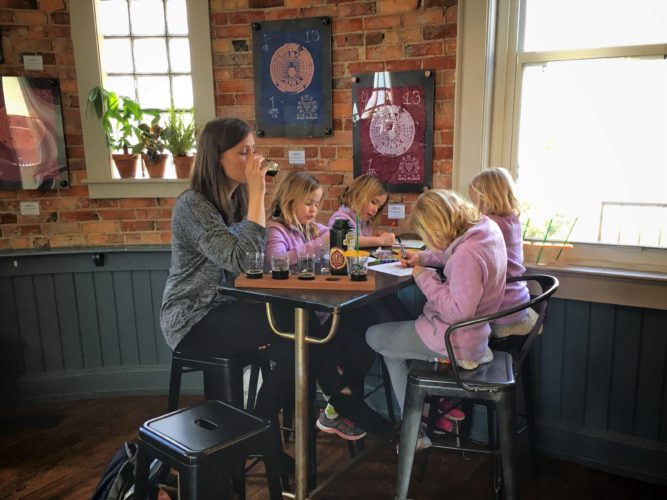 Are kids ruining the “Craft Beer Experience” for the rest of us?

Ten years ago, a majority of the microbreweries throughout the country were brewpubs; food service establishments with a full kitchen that also sold beer brewed on-site. As the popularity of craft beer continued to rise, taprooms have become synonymous with the craft brewery. Dedicated spaces to gather, sample, and purchase beer being made onsite…no kitchen required.

The more taprooms you visit, the more similarities you start to notice: exposed ductwork, industrial lighting, polished concrete floors…these barstools. Many have minimal, industrialized aesthetics with naturally lit interiors and endless rows of stainless steel tanks gleaming behind glass panels. One more thing you may notice becoming increasingly common at taprooms across the country: kids.

Back in February, the New York Post published an article proclaiming that baby birthday parties have “infested” the Brooklyn bar and brewery scene. Forbes Magazine followed up with a well-written article with the the headline “Parents, Think Twice before Brining Your Babies to Breweries and Bars” which, predictably, sparked a passionate debate across #beertwitter and the usual online forums. As only to be reignited once again with articles published in Craft Beer & Brewing as well as the Sacramento Bee.

So…are kids ruining the “craft beer experience?” As a dad (x4), craft beer nerd, and occasional beer blogger, I couldn’t resist inserting myself into the conversation.

Drawing a Line in the Sand(Box)

Should parents bring their children to a brewery? While the aforementioned articles bring new attention to the debate, it’s an issue that has been simmering for years. Even if you haven’t thought about it before, you might have an opinion on the matter yourself…an opinion that likely falls into one of two camps.

The most common argument you hear is that taprooms are the modern-day European Biergartens. Common entertainment at these 19th & early 20th century establishments included socializing, music, and games. The Germans called it Gemütlichkeit, a term used to convey a feeling of warmth, friendliness, and good cheer. 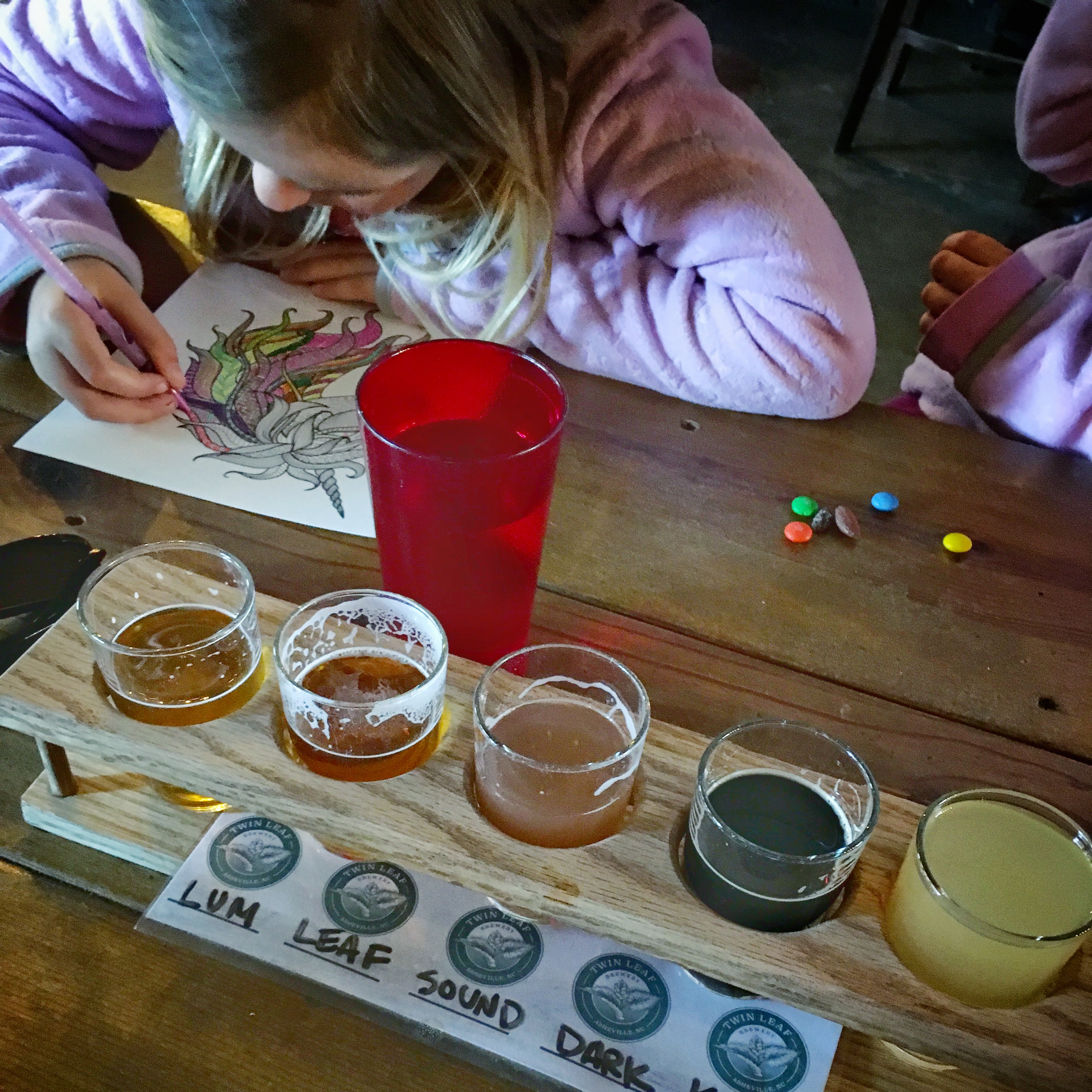 Craft beer isn’t something that should be consumed alone with only the pale light of Untappd glaring from your smartphone. It should be experienced with friends and family playing games, conversing, and enjoying each other in the moment. It’s not the beer that makes the experience; rather it’s the experience that makes the beer. More often than not, kids are becoming part of that experience, and breweries are adapting to that culture change.

Then there are the dissenters.

The argument here is as simple as it is obvious: drinking is an adult activity; breweries and taprooms should be adult-only spaces.

Most adults visit breweries to relax and enjoy a few pints after a hard day or long week at work. The last thing you want to hear when sampling are crying babies and unsupervised children causing a commotion. Those kids are likely miserable anyway; mom or dad becoming increasingly intoxicated while bored little Jimmy looks like he would rather be anywhere but there. At least, definitely somewhere a lot more kid-friendly.

Middle ground is hard to come by.

By now you might have noticed a glaring omission: clubs and bars.

While the image of a seedy, smoke-filled, dimly lit watering hole is (thankfully) a thing of the past, there are still noticeable differences between the traditional drinking establishments of yester-year and the craft beer taprooms of today. Even though both cater towards the adult beverage-consuming crowd, I personally tend to exercise quite a bit more caution when attempting to bring my family into a bar.

So what’s the difference?

For starters, a bar typically refers to a place that not only sells beer, but wine and spirits as well…none of which are self-made in house. In addition, many bars offer a much different environment than that of a taproom. Whereas in a taproom you find community seating and comfortable patios encouraging social engagement, bars with distant tables and small booths seem to offer the complete opposite.

Furthermore, at risk of stating the obvious, the drinks themselves are consumed for different purposes. A responsible parent can consume a pint or flight over the course of a few hours and still closely monitor their children.  A few shots down the hatch on the other hand and you will find yourself in the fast lane to drunkenness.

For their part, breweries are taking notice.

HopWorks Urban Brewery in Portland, Oregon, has become a national leader by providing kid focused spaces, activities, and events. On a recent trip to Asheville, we took our girl gang to Twin Leaf Brewery and enjoyed the afternoon playing Foosball, shuffleboard, and Headbandz (think charades for kids). For the record, we didn’t bring the game…we found it with a stack of others inside the brewery. 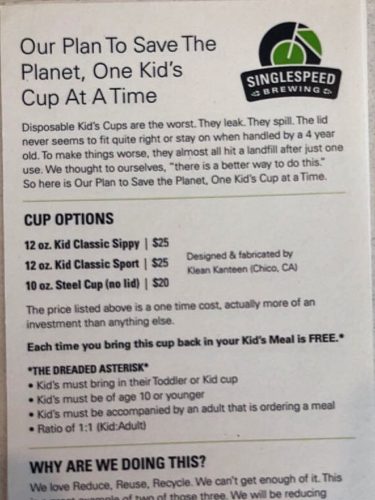 Closer to home, one Iowa establishment is going beyond the average brewery when it comes to welcoming kids and families into their taproom. SingleSpeed Brewery gone above and beyond board games and outdoor equipment. Visit their new taproom in Waterloo and not only will you see chalkboards, books, magnet boards, and block, but you may also find yourself right in the middle of a child-specific music concert or craft night. Not to mention, a mug club for kids!

“We have always prided ourselves on fostering a sense of community within our Tap Rooms,” explains Dave Morgan, founder of SingleSpeed. “If we didn’t create a room, or set of rooms that persons of all ages felt comfortable hanging out, whether chatting over a pint, playing with magnet letters or Legos, or diving into a shared plate, then we weren’t doing our job.”

The motivation behind this environment is not hard to find: Dave and his wife Dana have two little girls that enjoy visiting new taprooms as much as their parents do (I even had a chance to meet them at the Falling Rock in Denver last October!).

“If we created a space that wasn’t equipped for families, we ourselves wouldn’t get to enjoy the [SingleSpeed Waterloo] TapRoom as much as we would like.”

As for further inspiration, Dave described a trip to Portland in 2015 that fully opened his eyes to a family friendly taproom. “The appropriate way to create a kid-friendly space was essentially laid out for us. A good number of the breweries out there were doing it the right way, with HopWorks being the one that resonated the most with us, and we built our plan based upon the inspiration we found there. That trip was the first time we have seen with our own eyes, hospitality of this nature focused on making certain the kids were going to have fun too, allowing their parents some critical moments of relaxation as well.”

Today’s young parents don’t want to be associated with the seedy bars and absentee parents from the dramas we grew up watching on TV. We want to socialize with friends in a safe, welcoming environment while having options for the children we bring with us. 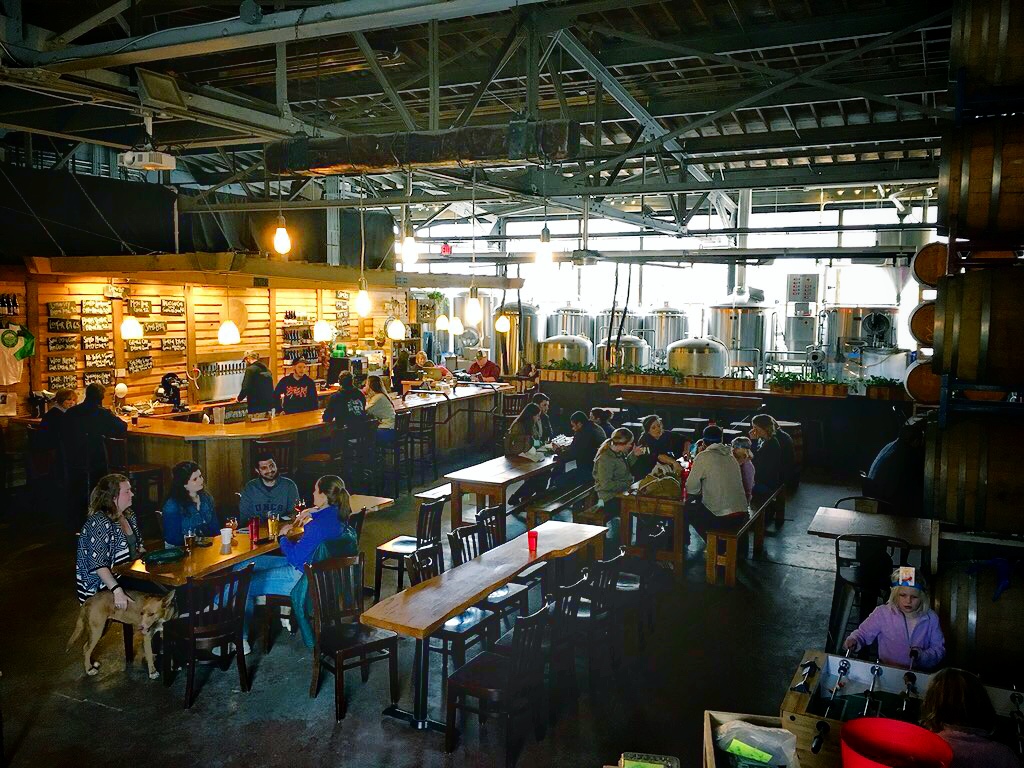 I have no problem taking my children into any of these spaces. Our kids are regulars on the Confluence patio after summer walks around Gray’s Lake. Our favorite spot for a quick bit to eat as a family is High Life Lounge in Des Moines. That’s not to say we’re oblivious to our surroundings when we visit. We strategically plan our trip for off-hours…think 4:30 on a Tuesday. We also try to snag a large booth in the less-crowded back corners to accommodate our large family. This also helps mitigate their urge to wonder throughout the restaurant or taproom.

But I get it. People will always have their opinions, and I’m not here to settle any debate once and for all. However, I will leave you with this: as parents, our children are always watching us and listening to us…our example behavior with them in “adult” spaces like bars, breweries, and taprooms could go a long way in helping them learn how to act and handle themselves responsibly when alcohol is present.

If we don’t teach our kids what’s *right*, someone else definitely will.

No Corkage Fee – No Problem in Des Moines
4,214 views
Skip to toolbar