I-Best: A Beer Festival for Brewers 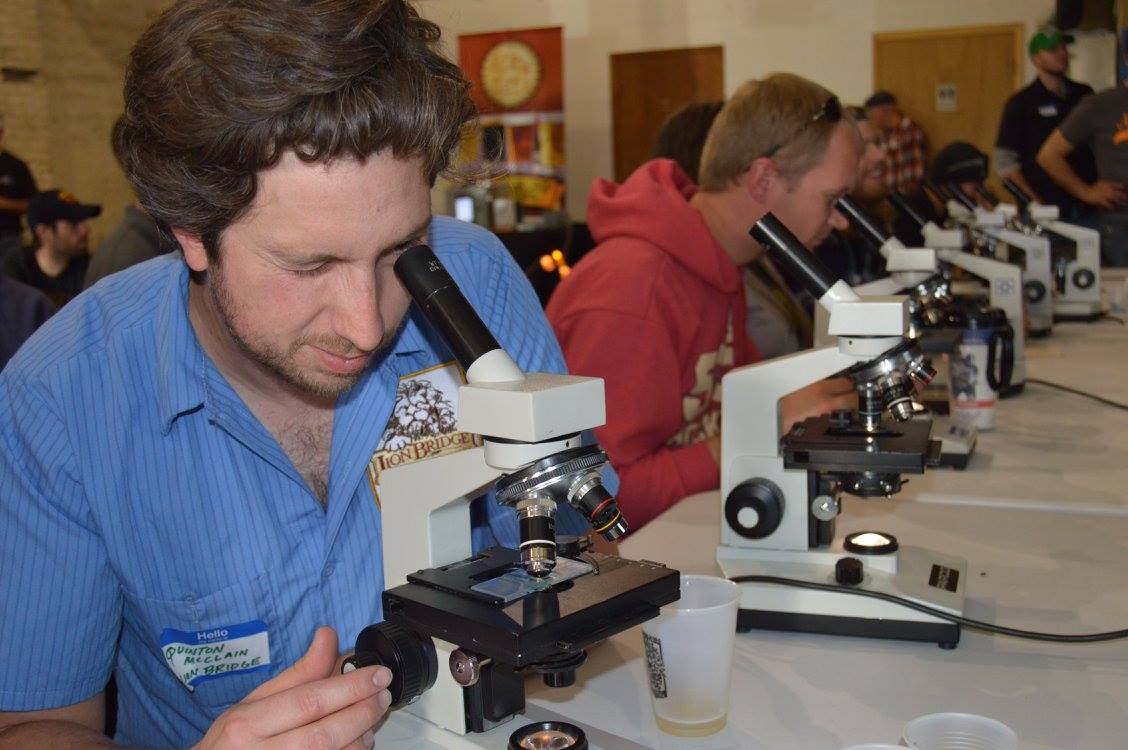 On one side, dozens of brewers poured over microscopes intensely absorbed on determining healthy count from a sample of Belgian Yeast.

Behind them paced Dan Weber of Delaware’s Dogfish Head Brewery, leader of the session and ready at beck and call to jump in and help focus a misaligned scope.

On the other side, Maggie Hanson of Brown Davis law firm in Des Moines lead a discussion on employing hiring and firing as a packed room of brewery managers listened intently while feverishly taking notes.

This was I-Best: the Iowa Brewers Education Seminar and Tippling.

Now in its third year, the Iowa Brewers Guild (with the help of a local brewery; this year the event was held at Peace Tree Brewing in Knoxville) has hosted I-Best to educate and enlighten professional brewers and dedicated beer aficionados alike. Perhaps the best part of all is that it’s not just for Iowa Brewers Guild Members; I-Best is an open event for anyone with a passion for craft beer to participate!

For those already in the craft brewing industry, content addresses issues on technical brewing as well as business and marketing. Homebrewers looking to improve their skills will find helpful information, and those planning a brewery or looking to transition into the industry can also benefit.

In short, it’s a beer festival for hardcore beer enthusiasts (or beer bloggers) like myself. In lieu of a pretzel necklace and another taster glass, by the end of the day, you’re left with a wealth of knowledge and new ideas to help further your own brewing expertise.

We didn’t waste any time getting started.

Check in and breakfast at Peace Tree began at 8:00AM, which meant that there was either a hotel stay the night before or early morning road trip involved for all attendees. With a packed schedule there wasn’t a minute to spare either; by nine over 100 brewers and industry professionals packed the local theater nearby for the first keynote presentation from the ISU Ag Extension on the state of the Iowa Hops Industry.

“This many people don’t even show up when I host this presentation for the entire mid-Atlantic brewers conference!” – Dan Weber, Dogfish Head

With that, we were off: morning breakout sessions from front-of-house organization and media management to hop contracting and yeast microbiology were standing room only. If that wasn’t enough, industry-focused vendors gave the brewery a trade-show vibe with informational booths and swag tables sandwiched between fermenting tanks and aging barrels.

“This many people don’t even show up when I host this presentation for the entire mid-Atlantic brewers Conference,” Dan Weber exclaimed as he began his slideshow on yeast microbiology.

Tipple, verb. gerund or present participle: tippling. To drink (alcoholic liquor) or engage in such drinking.

By late morning our brains began to overload. Luckily, liquid respite from the educational onslaught came later in the morning as the beers started flowing. Not only was Peace Tree pouring from their new root cellar, but brewers from around the state brought growlers and crowlers from their own breweries. The tippling commenced as lunch approached and a good ol’ fashioned bottle share broke out.

After all the barbecue was consumed, the 818 design team kicked off the afternoon with a captivating and hugely informational presentation on brewery branding and label design.

Meanwhile, other afternoon sessions included more yeast microbiology for those that missed the morning session, an intense panel discussion of beer packaging basics lead by a few Iowa and Nebraska’s most well-known producers, and “Social Media 201″ with Des Moines entrepreneur Ben McDougal exploring how to engage the consumer with social media and push the envelop further than beer twitter accounts and Facebook posts.

The day ended with a closing keynote address made by a renowned brewer and author, Dick Cantwell, formerly of Elysian and now an ambassador the Brewers Association. Our brains (and bellies) were full.

His highly metaphorical references might have been a bit over my head after such a long day of learning, but his message was clear: quality matters…which, if you’ve been paying any attention, is the message you hear reverberating throughout the craft beer community not only in Iowa, but throughout the country: craft, not crap.

Backlit by his wildly metaphorical slides, #craftbeer legend Dick Cantwell closed down a successful #iBEST for us at @peacetreebrew on Saturday. Another great day of #IAbeer education and another great family reunion. Big thanks to the Brewers Association for sharing Dick and his message on quality and to all our sponsors for making it happen!

Evening activities included pizzas back at the brewery; some brewers split while others hung around for hours into the night reflecting on all the events of the day.

Beer brings people together, whether it’s meeting a buddy for brews at the local pub, a bottle share with some close friends, or attending beer festival with a few thousand of like-minded folks from all over the region or country.

Attending a day-long educational outreach seminar on craft beer certainly isn’t for everyone.

I wasn’t sure what to expect before arriving, but by the time I left I had a new appreciation and understanding of what it takes to transition from a fun hobby into actually making a living from making beer…and even some ideas on how to improve my own kitchen brews. And while this wasn’t the typical beer festival, I would participate again without hesitation.

We are truly fortunate to have this awesome opportunity so close to home.

Authors Note: Above photos and tweets were used with consent of the 818 Design and the Iowa Brewers Guild.