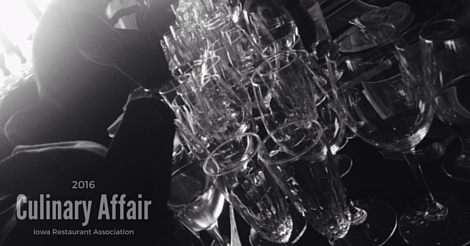 There is no doubt that one of the best night’s for eating in Des Moines happens when the Iowa Restaurant Association throws their annual Culinary Affair. It’s a night full of laughter, fun, fantastic food and a great opportunity for aspiring chefs in the ProStart Program.

Like I said, it is one of the best nights of eating in Des Moines and it was honestly true that night because the chef lineup was (insert 100 emoji) outstanding. Every chef that night had earned an award at least once during their career. Most of the chefs either had been Chef of the Year or Restauranteur of the Year. There were also a few contest winners present like the winner of the Soy Salad Dressing contest and a runner-up from the Food Network’s Cupcake Wars.

You’ll get to see who those are below as I highlight the plates that were served during this 7 course and 7 wine pairing event.

To start the night, we grabbed a picture from an outstanding photographer, Justin Rogers.

After we picked up our jaws from gazing at the views, we moved to the hors d’oeuvres table.

with a Pale Ale apricot glaze

with Nueske’s (Wisconsin) Canadian bacon on a brioche crostini

The wines that were paired with the hors d’oeuvres were a William Hill Winery -Central Coast Cabernet and a Central Coast Chardonnay.

After the appetizers, we headed to the dining room which was full of wine glasses.

The soup was prepared by Chef Michael LeValle (2011 IRA Restauranteur of the Year) and Chef Lisa LeValle (2014 Business Record’s Women of the Influence). The two are from Des Moines Embassy Club and Embassy Club West and Trellis Cafe in Des Moines, Iowa.

The pairing for this dish came from Pieropan Winery – Soave Pieropan. This wine opens with nuanced aromas reminiscent of almond blossoms, marzipan, white peach and honeysuckle. It concludes with a lingering finish that offers both length and concentration wrapping up delicious notes of honeycomb and marzipan, energetic minerality, and creamy lift.

The salad of the night was prepared by Chef Scott Stroud (2015 The Soyfoods Council and IRA Soy Salad Dressing Professional Chef Contest Champion). He can be found cooking at Jethro’s BBQ’n Jambalaya.

The pairing with the salad was J Vineyards & Winery – Pinot Gris

Begins with delightful aromas of roasted pineapple, candied lemon rind and honeysuckle. The palate is complex with notes of honeydew, jasmine and a sliver of minerality.

Chef George Formaro headed up this dish. You might know him from several other restaurant establishments throughout downtown Des Moines. He was also awarded the IRA Chef of the Year in 2011.

Chef Formaro and his team assembling plates for Culinary Affair

This dish was simply outstanding.

The wine pairing with this dish was from the winery Maso Canali – Pino Grigio.

Radiant with a pale straw hue. Crisp citrus aromas are backed by floral notes on the nose, where ripe nectarine also emerges. The palate delivers flavors of rich peach alongside delicate citrus notes and musk.

This dish is part of the evening to cleanse the palate. Chef George Migliero (2014 IRA Restauranteur of the Year) created this dish. You can find him at G. Mig’s 5th Street Pub in West Des Moines.

with a mandarin orange martini. This treat, to get the flavor, took about 5 hours of orange peel in a simple syrup + some solid sledgehammer whacks to break down the ice.

Just when you think you had enough alcohol in this drink, there was a wine pairing to go along with it!

It opens with aromas of fresh citrus, honey, and white flowers. The palate is fresh and clean with ripe lemon, green apple, and grapefruit flavors, framed by mineral undertones. The finish is light, refreshing and crisp.

The next chef that prepared the entree is one that all of Des Moines needs to keep an eye on over the next couple of years. Chef Lynn Pritchard (2015 IRA Restauranteur of the Year) of Table 128 + Bar in Clive, Iowa, knocked it out of the building.

A Palazzo della Torre from Allegrini was paired with this dish.

Velvety and well-balanced the Palazzo della Torre showcases a profound character of mature fruit and carries an againing potential of at least 10 years.

To wrap up the night, we enjoyed a Brut Rose from J Vineyards & Winery. This rose offers layered aromas of fresh strawberries, raspberries, and apples.