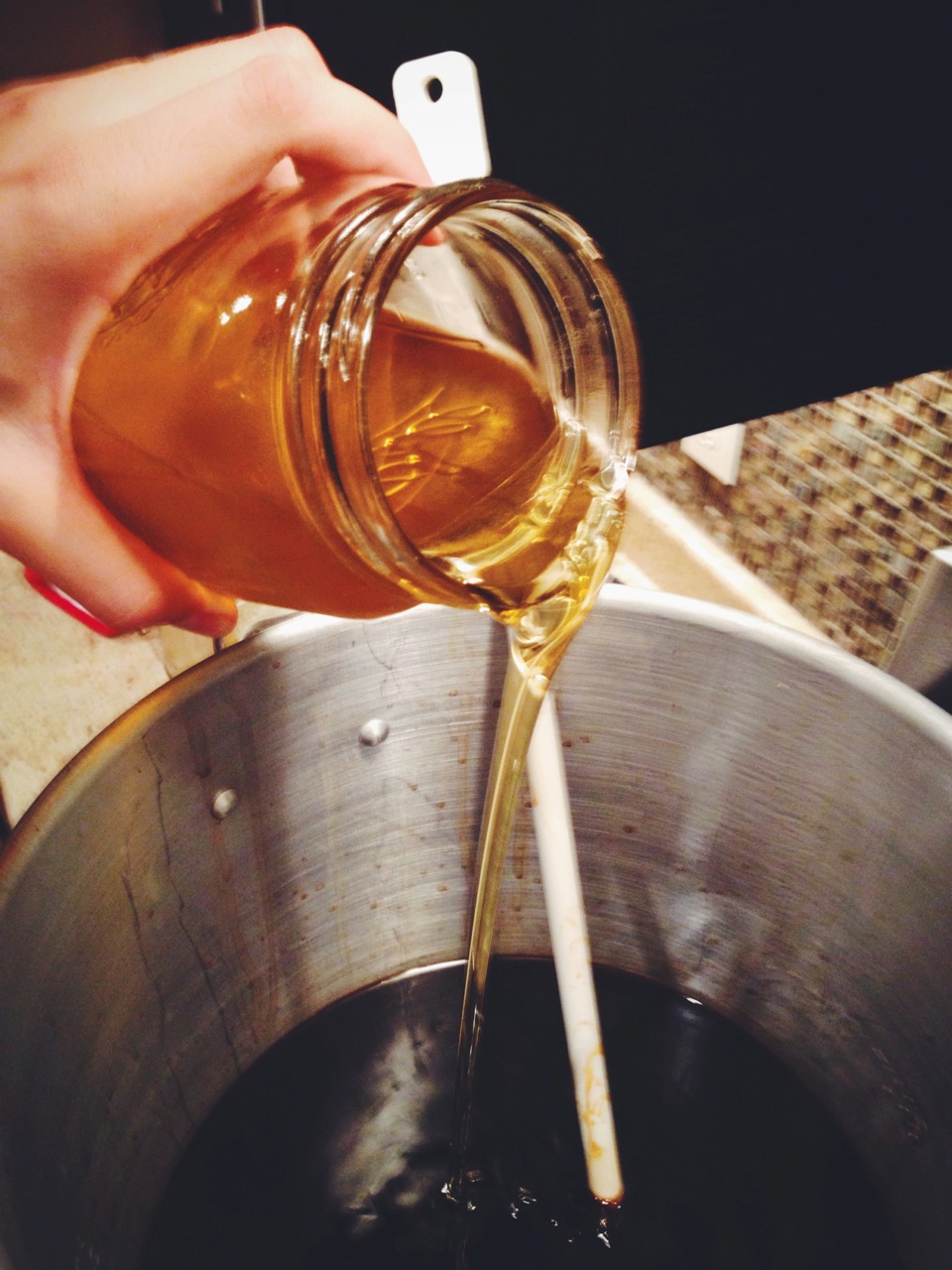 You can make beer with (almost) anything.

While some additions, such as coffee and dried fruit, are fairly common, other ingredients like habanero peppers, live lobsters, and even beard hair sound like they shouldn’t belong anywhere near a brew kettle. Even so, strange brews and experimentation are part all of what makes brewing beer at home so fun.

So naturally when I acquired two quarts of pure Iowa wildflower honey less than a month removed from the hive, I knew what I had to do with it.

Obviously honey is far from the strangest brewing ingredient out there, but it still requires some additional planning when adding it to your beer recipe. Use too much honey and you’ve made braggot (a honey/beer combo)…use only honey and you’re left with mead (honey wine). Don’t get me wrong, Mead can be pretty tasty, but that’s not what we’re trying to make here.

The most common reason to add honey to your beer is to raise the %ABV without significantly increasing the overall body of the final product. Even though it’s logical to think that by adding honey you’ll also be adding sweetness to your beer, in reality very little of that “honey” taste will remain after fermentation.

I won’t go into too much detail (for that I highly recommend this post via BYO.com), but there are two schools of thought when it comes to adding honey into your homebrew:

With pros and cons to each method, the next step is figuring out what works best for you.

Putting together the recipe was fairly straightforward. I started with the White House Honey Porter and modified it to create an all-grain version. Maris Otter for the base malt and mix of caramel, Munich, and dark chocolate (save those roasted malts for your stouts!) for the specialty grains. An important thing to remember when brewing with honey is that 10-20% of your fermentables will be added after the mash; without adjusting your grain bill accordingly, your alcohol content will be a lot higher than anticipated.

I’ve brewed with honey in the past, each time following instructions from a recipe kit (this one) to a tee. Each time I’ve added the necessary honey at the beginning of the boil, and yet each time I ended up being somewhat dissatisfied with the end result. While they didn’t turn out bad, I will say that they left much to be desired.

Knowing now that there are better ways to do it, yet still unsure of which method would produce a better drinking brew, I took to Twitter (which is becoming a go-to resource for all things beer)…

Question for my fellow home brewers: have you ever used honey in your recipes? If so, when did you add it: boil, flameout, or fermentation?

…and asked if any other Des Moines area homebrewers to could share their expertise and past experiences.

@DSMbrewster very late in the boil, for me. Mostly just to have the heat blend the thick honey it into the wort easier. Only 1 try, so far. — Steve Kaiser (@CptSuburbia) November 18, 2015

@DSMbrewster Last 15 minutes of the boil. I’ve talked with a couple of brew masters that gave me that tip

@DSMbrewster I’ve done both, end of the boil and a couple days after fermentation got going.

Unanimously, the “add honey to the end of the boil” method was the winner.

Truth be told, I was leaning that way to begin with…not only to cut out a few extra steps, but to save myself the stress of worrying about contamination while attempting to add honey during fermentation as well. Plus I didn’t want the honey to overpower the malt punch my porter should be packing…just enhance the flavors just a bit.

The brew day went as planned: Mashed at 152F…

…then sparged, boiled, and added hop additions at the necessary intervals before adding the honey with 10 minutes prior to flameout.

With my original gravity measuring at the calculated 1.063, I pitched Wyeast 1056 at 68F and closed her up.

At last check, I was still getting some low level activity in the airlock. I don’t plan on racking to a secondary, so this honey porter should be in bottles late next week and (hopefully) drinking by Christmas. Wish me luck!

I will be updating this post as needed to let you know how things go. Have you brewed with honey? Tweet me @DSMbrewster or let me know in the comments how it turned out!