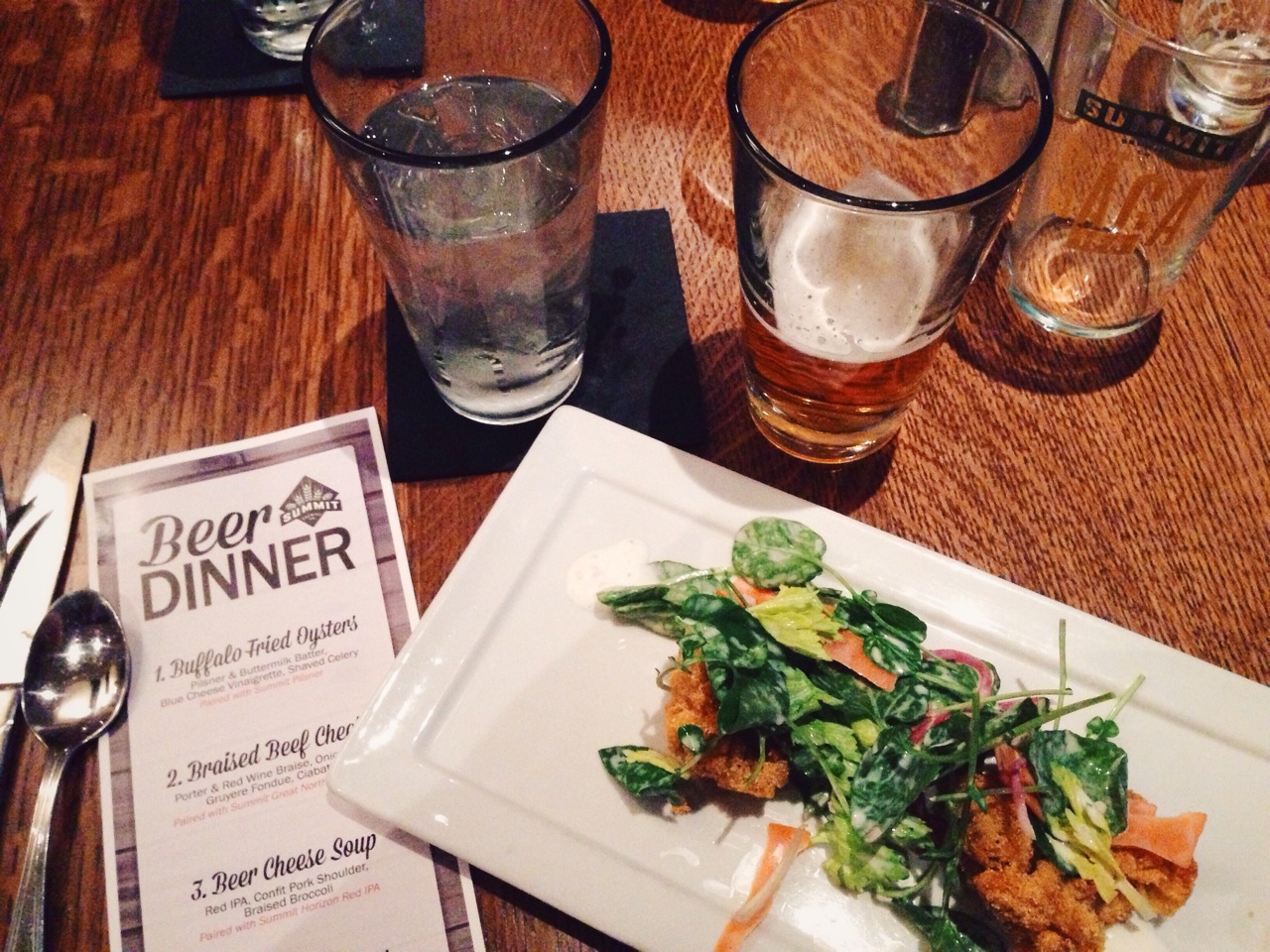 If I were to ask you to name the largest Craft Brewer (by volume) in Minnesota, what would your guess be?

To which I would smugly reply “guess again!”

You learn something new every day.

Considering that I had no idea Summit Brewing Co. was our northerly neighbors largest craft brewer, it’s obvious that I had no idea who (or what) I was expecting to see when I signed up to attend a locally hosted Beer Dinner with Summit head brewer Damien “Damo” McConn.

Which also explains my surprise when, instead of a burly, bearded, beast of a man I had pictured in my mind, I was so shocked to see a young, curly-haired Irishman instead.

After a brief introduction, followed by a quick overview of Summit Brewing Co., the first course arrived at our table. With it, and with each course that followed, came a soliloquy from Damo, which seemed less like a pre-rehearsed speech and more like a steady stream of consciousness straight from his Irish mind.

As I listened, I realized that instead of only telling us how each particular Summit style paired with the chef’s (exquisitely prepared) selections, Damo was also dropping some serious beer knowledge on us. So halfway through the second course I began scratching down as many of these nuggets as I could while still enjoying my meal.

While it may have likely company rhetoric, it was still fun to hear how Damo approaches brewing beer by using a four-legged methodology (four legs, like a chair!):

To be sure: none of this was Earth-shattering information, but it was still really cool to catch a glimpse “behind the curtain” of a big-time craft brewer regardless.

The most poignant part of the evening came when Damo asked by a show of hands, who orders the exact same pint of beer each time he or she goes into their local pub.

Not a single hand was raised, which demonstrated his point perfectly: whether it’s heavily-hopped IPA’s or more sours & funkier Bretts, American craft beer drinkers are always looking for something different.

Trying to stay ahead of that curve is the greatest challenge to craft brewers today. Popular sellers like Pilsners and Porters of the past have now fallen out of favor, forcing brewers like Damo to continually come up with new creations.

Taking On the American IPA

A few of those creations include some of Summit’s best sellers, like the Saga IPA. Although this monster West Coast IPA comes in at 80 IBUs, it’s remarkably well balanced and has a smooth, clean finish…all while coming in at only 6% ABV. It’s all a part of Summit’s commitment to provide craft beer drinkers something different. To paraphrase Damo:

Drinking beer is a social activity. It’s meant for enjoying with your buddies at the pub and talking about…about the universe. Beer helps “lubricate the conversation.” Not make it unintelligible. It’s not about higher alcohol content, where you can only have one or two and be done for the night. Or higher bitterness, stuffing it with hundreds of IBU’s just to see who can make the hoppiest drink. I encourage you to try something different.

[Tweet “Beer helps “lubricate the conversation.” Not make it unintelligible.”]

Saga is hopped up, but Damo uses a less common New Zealand hops…not a variety you typically find at all in an American IPA. For Summit’s Horizon Red IPA, he uses sweeter, caramel or “CaraRed” malts to balance the citrus notes from the hops rather than just hitting you over the head with their bitterness.

It’s one thing to drink the beer, but to hear the back stories from a brewer’s perspective, well…it’s truly innovating stuff.

Throughout the evening, Damo continually brought up the Porter…his favorite style to brew. After the event was over I had a chance to meet him personally and ask him why he preferred making the porter over all other styles. His response: “Because it’s tricky. You can’t hide behind a porter; it forces you to get the flavors just right.” Apparently the man likes a challenge!

[Tweet “You can’t hide behind a porter; it forces you to get the flavors just right.”]

As we were leaving I quickly asked him, as a homebrewer, if he had any advice for me. He grinned and replied: “Just keep doing it. Keep innovating, and don’t quit!”

Then he handed me his personal card and told me the next time I find myself in St. Paul to get in touch for a pint.

Count on it, Damo.

No Corkage Fee – No Problem in Des Moines
5,206 views
Skip to toolbar