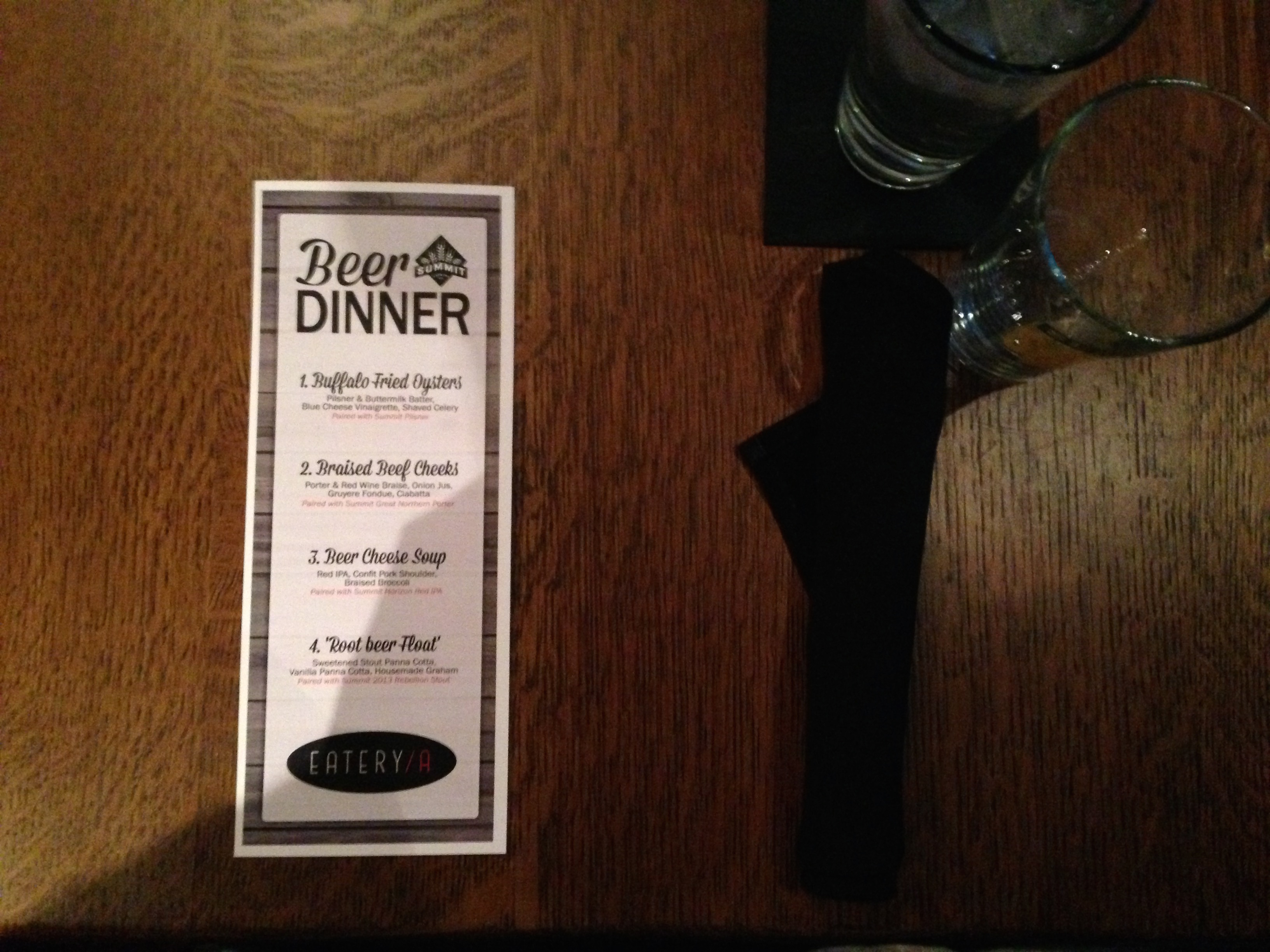 Not too often do you get to have a sit down meal with a head brewer – in this case the head brewer from Summit Brewery in Minneapolis, Minnesota. It was a cold, wet and quiet night in Des Moines but the atmosphere in the event room of Eatery A was loud, warm and alive. Doll Craft Distributors and Summit’s own Damian “Damo” McConn hosted a 4 course beer dinner that was, as my new friend across the table stated, “fucking amazing”. You all probably have an idea of pairing foods with drinks – especially wine. Chocolate and wine, simple, but pairing food with beer, as Damo says, is tricky to pull off. What beer dinners are all about is making 2+2=5. In this setting, Eatery A’s chef, Nic Gonwa, made it seem easy.

Take a look at what Damo and Nic presented to us:

Dinner thought: With any course meal, the first plate is really going to set the mood for the rest of the dinner. Boy, were we in for a treat. The plate was presented will The oysters that we enjoyed had been soaked overnight in buttermilk and Summit’s Pilsner. The buttermilk usually kicks the fishy flavors out of fish but the best part was that the Pilsner came in a took control of the flavor. The oyster was nicely fried leaving crispy battered bites to soak up the slightly spicy blue cheese vinaigrette.

First, full disclosure: pilsners are one of my least favorite beer styles. So what else could have been the first beer served on my first beer pairing dinner? It’s as if the beer gods were saying “Hey man, if you’re going to write a beer blog, you can’t just talk about IPA’s all day long.”

Summit take on this classic style is true to its bohemian heritage, even using authentic Saaz hops from the region. Yadda yadda yadda. A pils is a pils is a pils, I thought.

Then I took a sip of the light golden beverage in front of me.

Maybe it was the oysters talking…the ones so tender that they practically melted after each bit…but the Summit pilsner was the perfect complement: crisp, light, delicate. Not overpowering the dish in any way, with just enough citrus presence to balance the heat from the cornmeal breading. I’m not sure how this beer would stand up on its own, but for this occasion I couldn’t have asked for anything better.

Dinner thought: All hail the mighty braised beef cheeks. These were so delicious. Tender beef was plated right in the middle of a one-of-a-kind onion jus soup. At first, I was a little nervous of a bowl full of onion but I couldn’t get enough. The end of the table I was at couldn’t get enough. We were asking if there was an option to take some home – some even asked if they could finish their neighbors.

Beer thought: What’s up with Porter?

Seriously, I feel it’s one of the most misunderstood beers out there, starting with yours truly. It’s not as “heavy” or high alcohol as a stout would…usually with only a subtle (if any) hop characteristics, unlike a Pale Ale or an IPA. That’s probably why this popular style of old fell out of favor in the first place (only to be revived by craft brewers in the late 80’s and early 90’s, as Damo would explain to us later).

I wasn’t sure how well I’d like Summit’s Northern Porter arrived with what was undoubtedly my favorite course of the evening. However, the roasted coffee flavor and somewhat sweet, dark chocolaty finish turned out to be the complement with each savory mouthful of beef cheeks and au jus. The lighter body of the beer didn’t fill me up like a heavy stout would have…my only disappointment was not getting more!

Dinner thought: This was a really unique dish in the fact that it wasn’t served in a bowl. The beer cheese soup was presented on a plate which served as the base of the confit pork shoulder. Pureed broccoli added an extra color to the yellow base. It was just as delicious as the beef cheek. It was a unique twist especially with the crushed pretzel coating. One of the most bizarre comparisons that I heard that night about this dish was that it was like head cheese – yeah, I’ll just leave it at that.

Beer thought: Our third course arrived with a Horizon Red IPA, which turned out to be one of Summit’s more surprising beers.

At first glance, the deep copper colored appearance of the beverage in my glass would tell me that I was about to enjoy a nice red lager or amber ale. As I studied the aroma and took the first sip, I realized this was definitely not the case. This hop forward brew smelled of citrus and pine, but rather than only using pale malts, Summit utilizes caramel and Cara-Red to build the backbone of this beer. These gave the IPA a sweeter flavor and red color of the namesake.

The course itself was again delicious, but I would have liked to try something a bit spicier to really play off this higher hopped beer.

Dinner thought: I had just seen an image on Facebook of a Guinness and vanilla ice cream as a St. Patrick’s Day treat. A little ironic since Damo used to work at Guinness. Anyway, the dessert was phenomenal too. Me and another dinner guest picked up the mason jar and took a drink first before eating the ice cream. We thought that it was vodka at first because of the strong alcohol taste! After we realized that it was stout, I was about to focus on that flavor rather than something more vodka like. The house graham was a real treat too. I hope I can pick some up for my summer s’mores. The creaminess of the ice cream and the stout was something I really enjoyed – look for more of those treats as the summer goes on at local breweries.

Beer thought: Our first taste of the evening’s final brew, the no-longer available Rebellion Stout, came with a surprise: a large dollop of homemade ice cream and a homemade graham, all served together in a single concoction.

A root beer float, minus the root.

Other than some strong dark chocolate notes from the beer itself, I was unable to pick up any other hints or flavors from stout. To my surprise, however…the combo was seriously working for me.

Finally they brought out a glass with just the beer, which helped confirm my suspicions: this was a delectable beverage. A beige head and an opaque, inky black appearance gave way to a lighter than expected body. Surprisingly flavorful combination roasted malt flavors and balanced, hoppy bitterness made for an excellent “dessert beer.” Hid the higher ABV (8.9%) very well.

It was a great experience and a really fun night. Like Damo said, pairing beer and food is one of the hardest things to do. Although, that night it seemed pretty easy to do – it was sure easy to enjoy! 🙂 There is a lot left to be learned about food and beer pairings. This was definitely a great taste (pun intended) of what beer pairings can really do to a meal. Because let’s be honest, not all of us what a nice red or white wine with just chocolates or a fancy piece of meat.

Tell us what your favorite food + beer pairing is in the comment section!

No Corkage Fee – No Problem in Des Moines
5,206 views
Skip to toolbar