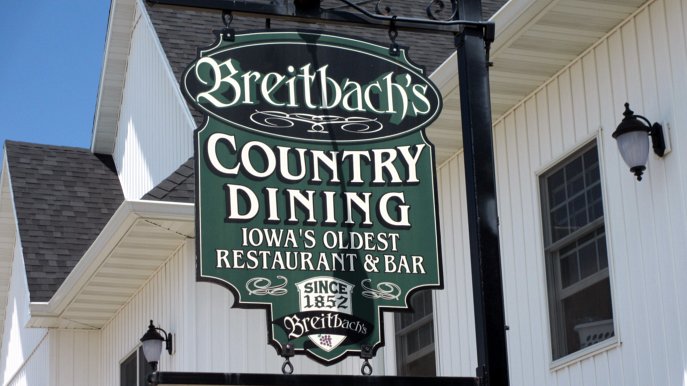 Maybe it’s the fact everything is made from scratch and the mashed potatoes are fluffed just right, the English Walnut pie & ice cream is melt-in-my-mouth, and the lightly battered cod tastes like it swam straight to my plate, that makes me keep going back year after year. That seems logical, but not entirely true.

Good food, good scenery, and good people are worth the drive-whatever the distance may be, it’s worth the trek to Breitbach’s Country Dining from any direction.

On a historic note, it’s the oldest restaurant & bar in Iowa, est. 1852.  The food isn’t, though. It’s fresh, delicious, and homemade daily.  The best prime rib you’ll ever find will have you still salivating weeks later. Another go-to is the juicy, succulent tenderloin complimented best with a side of grandma’s best style potato salad. Most noteworthy is-an all-you-can-eat buffet featuring fresh salads, fish, chicken, ribs, shrimp, mashed potatoes, and soups will leave your belly and your pocket more than satisfied ($15.95).

Where: Balltown, Iowa (right along the Mississippi near Dubuque, Iowa)

Nearby: Scenic overlook of the Mississippi & Skip’s Country Store across the street (a must-see that Mike’s brother owns)

My Breitbach story is different from other’s but not uncommon-everyone who goes to Breitbach’s has a story and knows Mike. If you don’t know Mike then you haven’t gone enough, and if you haven’t gone enough then you’re not a regular. If you’re not a regular than you better become one.  For me, it began when I was very young-about 6 years old. My parents took me to the first, original Breitbach’s (Breitbach’s has burned down and rebuilt twice all in a few short years-all as of a result of community teamwork & funding)and back then the buffet was only around $8.

After one trip we were hooked & travelled there many Saturday afternoons. My dad had a check never clear he wrote Mr. Mike so he sent him another one-Mike thought that was the most stand-up thing ever and since then we’ve bonded with Mike-he even let us set off some firecrackers off the restaurant porch on the fourth of July.

If you don’t know Mike, or haven’t watched their famous documentary, Spinning Plates, you’ll want to-he’s not just a restaurant owner-he’s the Mother Theresa of the entire county (and then some). Mike isn’t in the business to make money-he’s in it to make people’s day-and it shows. He personally delivers meals to elderly who can’t make it to the Breitbach’s community hang-out. Also, he farms on the side and all of his kids help out at the restaurant-talk about a family with teamwork skills.

The same care Mike puts into people goes into the food-each bite is like sitting at Grandma’s table at Thanksgiving-you can tell hours of time and the utmost care went into preparing everything from the home made cheese spread (which is to die for) to the pasta salad and marshmallow crème foof. The advertising is word of mouth (literally) as Mike does business the old fashioned way without all the hub bub of technology that most modern restaurants rely on for publicity.

I could rave about Breitbach’s all day but for now, get in the car this weekend, make the trip, check out the scenic highway and lookout, order the buffet, meet Mike, and get some pie. Most importantly, do it again and again and again, maybe your generations will be as lucky as I have been. Oh, and through it all, Mike’s never changed and the food is just as good as when I was six.

Mar 24, 2015Anna Lucs
A Guide On What To Do Before You BrewSummit Brewery Beer Dinner at Eatery A
Comments: 5

No Corkage Fee – No Problem in Des Moines
4,480 views
Skip to toolbar