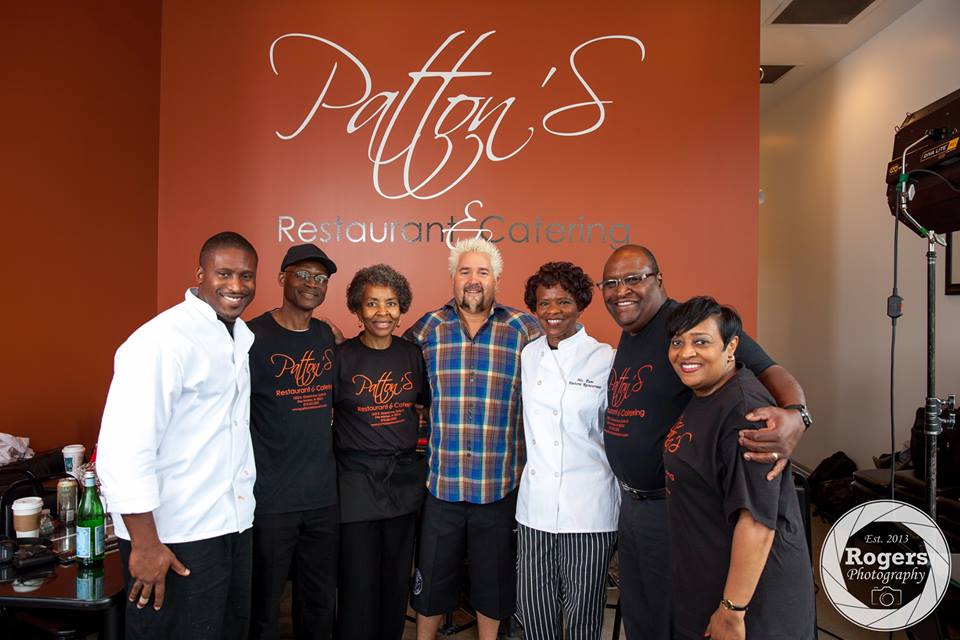 Well, now that the major media outlets are talking about it – I guess I can drop the word too!On Tuesday I had the chance to go have lunch at Patton’s Restaurant and Catering. It was a lunch outing, but a different kind of one that had cameras. I was able to attend the first part of taping for a show that is featured on the Food Network called Diners, Drive-Ins and Dives. For some reason, I have the hardest time putting those three words together. Try it really fast. Unfortunately Guy Fieri wasn’t at this taping, he was going to be at the second one which happened to be today.

The restaurant has a great, modern and refreshing atmosphere to it. Thanks to wall-to-ceiling glass, the whole dining room is exposed which gives the place tons of natural lighting. The kitchen is slightly exposed too which lets the flavors of fresh fried chicken leak out into the dining room area. The floor is concrete, and the tables were a modern style too.

According to Patton’s website, they’re Des Moines’ #1 soul food option – you bet I believe that. We all devoured Patton’s lunch buffet. We had some great options to choose from. Our plates were stuffed to the max with homemade fried chicken, fried fish, black-eye peas with ham, stuffing and mac and cheese. Folks, this is the best buffet mac and cheese I have EVER had. Why? How? You ask… Well, it’s impressive to leave mac and cheese out over a warmer and maintain a fresh, gooey, and cheesy side dish. I dipped my fork in some Franks sauce and then took a bite of the mac. That was my favorite combo.

To finish the meal off, after a couple of deep breaths, I had homemade peach cobbler. The crust and peaches were still warm, and the “filling” was the perfect amount of sweetness.

People of Des Moines, you need to put this on your Sunday menu, or take a nice long lunch to treat yourself with some amazing chicken, and soul food. Patton’s has the Des Moines soul – in the best way possible.