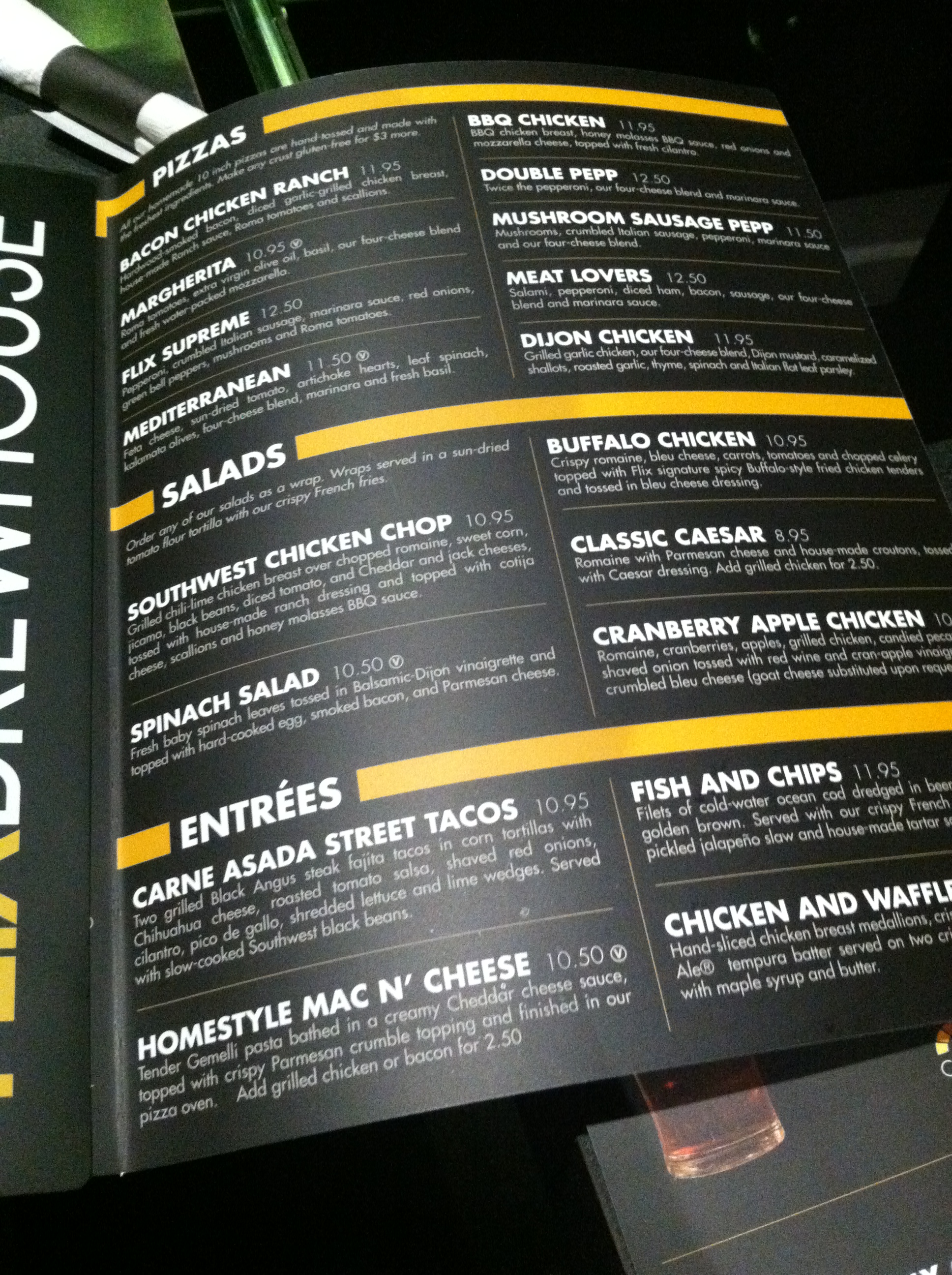 Flix Brewhouse in Des Moines, Iowa is one of the three cinema breweries located in the United States. The other locations are in Round Rock, Texas and Caramel, Indiana.

Flix is where three of America’s great loves really come together – craft beer, food and the movies! Based on the turnout, this statement holds true for Des Moines.  On a Friday night, Flix in Merle Hay Mall becomes the start of the weekend with a beer and movie ticket in hand.

We’ve had several friends attend movies at Flix before but I was always the odd man out because I hadn’t been yet – until now.

$8.95 – Fried pickle chips served with house-made ranch dressing. Hot from the kitchen, but lacking the spiciness that I was expecting from the title. Of course, the restaurant ranch dressing was a winner. There’s something about ranch dressing at a restaurant that I can’t seem to find in a regular bottle from the grocery store.

I was informed that they had just started a new menu at Flix Brewhouse so I had to give a couple of their options a try. There were two entrees that caught my eye.

The chicken medallions covered in maple syrup were delicious but I could’ve cared less for the waffles. It wasn’t plated too appealing either – granted, you’d be eating this in the dark if you didn’t order early enough.

I was only able to snap one picture before the lights went down for the movie.

I must say that constructing a taco in the dark is a difficult task. I really enjoyed the roasted tomato salsa. It had a nice amount of spice along with the roasted/smokey flavor from the tomatoes. I could barely finish the taco that I split with my fiance. They were fully loaded with steak, cheese and shredded lettuce.

I ordered the Lupulus IPA (7.0% ABV and 70 IBU). Side note – I didn’t know until now, Lupulus is a common hop. I feel kind of embarrassed for not knowing that with my home brewing knowledge. Anyway, the Lupulus is an amber colored American IPA with a nice balance of American hops. I really enjoyed this IPA. It was simple and went well with the food we had ordered.

Overall, it was a fun experience to attend a movie in that type of a setting but I would’ve rathered gone out to dinner at another restaurant and then had beers during the movie.

No Corkage Fee – No Problem in Des Moines
3,996 views
Skip to toolbar