Thoughts from a Home Brewer 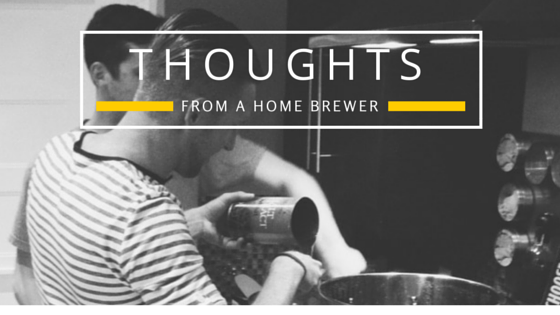 On most occasions, such thoughts usually consist of sheer panic and “Oh crap, I think I just screwed this whole thing up.” But other times, a rather interesting stream of consciousness can develop. During one such instance I realized that my recreational beer drinking has come to a bit of a crossroads.

It’s hard to pinpoint exactly what caused me to second guess my fridge stash, but I’m sure it had something to do with exceeding the maximum amount of IPAs consumed before before they all started tasting the same. I don’t know how many “hop forward” brews I’ve enjoyed over the past few years, but it’s certainly quite a few. So lately I’ve been attempting to (if you pardon my cliché use of the phrase) expand my palette and broaden my beer horizons.

To start, I’ve begun purchasing brews by the bottle rather than by the six-pack. From Funky farmhouse ales and tart open-fermented sours to imperial stouts that pour like motor oil, I’ve stumbled upon some new favorites while drain-pouring other bad decisions. Yet all the while, I keep coming back to the same notion over and over again: it’s all just beer…water, barley, hops, and yeast.

Of course there are a multitude of adjuncts and additives used as brewers continually reform and push the boundaries of their craft, but the foundation remains the same. From the freshly minted neighborhood Nano-brewery to the likes of Stone and New Belgium with nationwide distribution, the process of making a beer is unchanged. And with over 1 million home brewers (and growing) throughout the United States, it’s hard to miss this connection.

For me at least, knowing that what’s going on in my kitchen during a brew night is the same process (albeit on a much smaller scale) as some of my favorite brew houses across the country is a huge part of the appeal. My equipment is crude and my process is rudimentary, but the craft I am attempting to perfect is consistent with breweries all over the world.

Plus on top of it all, making beer is a damn good time.

While the thrill of creating your next new beer is always rush, it’s even better when you invite your best friends over and watch them get their hands dirty.

Like I said, there’s a lot of waiting around during brew day: waiting for the mash, waiting for the boil, waiting for your wort to cool. All the spare time usually leads to an impromptu bottle share (or the aforementioned stream of consciousness), and we all know that’s never a bad thing.

Ever guy and gal  hooked on home brewing has had the exact same though after creating their first truly successful batch: I should start a brewery.

As the craft beer scene continues to thrive, stories abound from coast to coast of basement brewers finding success and turning pro. In fact, some of my favorite breweries here in central Iowa with just such beginnings (I’m looking at you, Confluence & 515). I’d be a liar if I told you that the thought hadn’t crossed my mind a time or two…thousand…

Obviously, with four young kids at home…all with braces, proms, college, and weddings in front of them, quitting my day job and starting a brewery from the ground up just isn’t in the cards. Plus by the time I built up my recipe repertoire and saved up enough cash to “go pro,” I fear the craft beer boom will be long gone. At least that’s what I keep telling myself.

In the meantime, that doesn’t mean a guy can’t dream. After crafting some killer brews, the next step is creating a solid brand, amiright? It’s all about nailing those bottle labels for the next beer swap!

Right, so I’m no graphic designer…but it’s a start.

So what’s in the name?

Suburban: West Des Moines, represent! #suburbia
Brewing: Fairly obvious.
Project: Not a brewery, not a brewing company, but a project. (Not a Side Project…that one’s already taken)

And because calling it Des Moines Brewster Beer felt too self-anointing. Plus it’s not just me doing the brewing: for our official brew night we had a full kitchen of helpers and onlookers each enjoying good company and the experience of making beer.

That’s really what we’re about at the SBP…after all, brewing is better with friends.

Sound off, fellow home brewers: what thoughts go through your head on brew day?