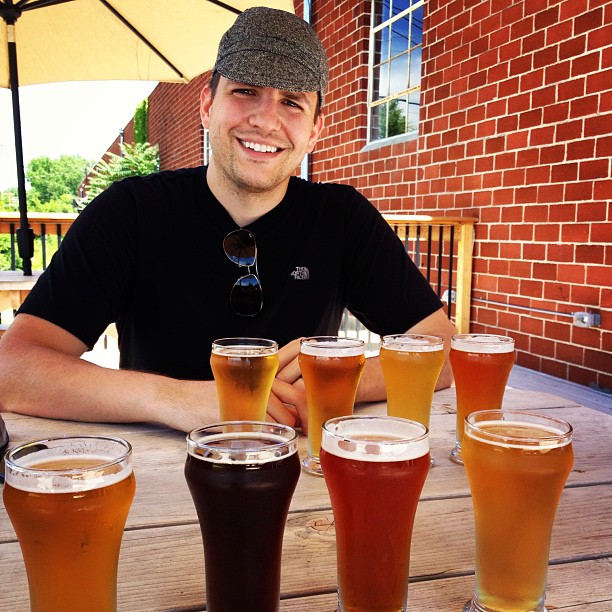 Talking about yourself is hard. Am I over-sharing? Am I being too braggy? Or too vague?

Nick asked me to write a quick bio for Des Moines Foodster, and what should have been a 20 minute process took almost two hours. That’s pretty lame, especially for a 100-word-post. The struggle is real!

One little snippet doesn’t always tell the whole story, so I thought I’d expand my “blog bio” by conducting a full-on interview with…myself.

Just read your bio. Tell us a little more about yourself.

As I mentioned previously: I’m an east coast transplant that’s now coming up on 10 years of living full-time in central Iowa. I’ve been married for almost nine of those years and my wife and I have four beautiful daughters that keep us very busy!

…and any combination there-of!

What first turned you on to craft beer?

Until I moved to the Midwest, my only foray into the beer world was a making choice between Yuengling and an American light lager. Boulevard’s unfiltered flagship brew opened my eyes to a whole new world of super-fresh flavors, aromas, and tastes. Plus living only three hours away from their home base in KC triggered the “local” (although still somewhat distant) association that appeals to so many other fans of craft beer.

Even though I still covet an ice-cold Yuengling every time I head east for a visit, from there on out, I was hooked.

So you’re a beer snob.

Kidding! I’ve got nothing but love for the big brewers…they’re so successful for a reason! Plus, a lot of the big companies own breweries and beers that we would consider “craft,” so I’d be doing everyone a great disservice if I excluded half of the industry.

What else can we expect from your posts?

Content focused beer reviews, best-of lists, home brewing, and brew pub/tap room profiles, all while striving to keep everything as local as possible.

My biggest pet peeve while reading articles on craft beer is seeing a list of “Top Five Craft Beers to Drink This Summer” and then realizing all of them are one-off runs or beers only available on the west coast. If I publish a “Top Five” list, it might not be all locally brewed, but I at least want to make sure Iowans can find the beers in most local grocery stores or bottle shops.

So then are you an authoritative voice on craft beer?

Hardly! I’ve been blogging since 2009, but writing about craft beer didn’t fit the direction my personal blog was headed, especially once I had children (and started unapologetically posting stories and pictures of them). I needed another outlet.

Nick and I started talking a few months ago about writing beer-centric posts on DM Foodster, then one thing lead to another and the Des Moines Brewster was born.

As for an authoritative voice? I’m new at this and just want to write about what interests me most. For what it’s worth, all statements and opinions are my own…you may take them or leave them! Of course, questions, comments, and suggestions are more than welcome.

Someone who brews beer is a brewer. Someone with formal education on brewing is a brewmaster. While I enjoy making beer for fun, I’m definitely not a brewmaster by any stretch of the imagination.

Nick says that a Foodster is the unholy fusion of foodie and hipster, but I’m not nearly cool enough to pull that off.

Honestly, I think it’s as simple as this: the term “Brewster” fit the theme and sounded good too, so it stuck!

Thanks for reading, and until next time: cheers!

5 years ago The Des Moines Brewster150