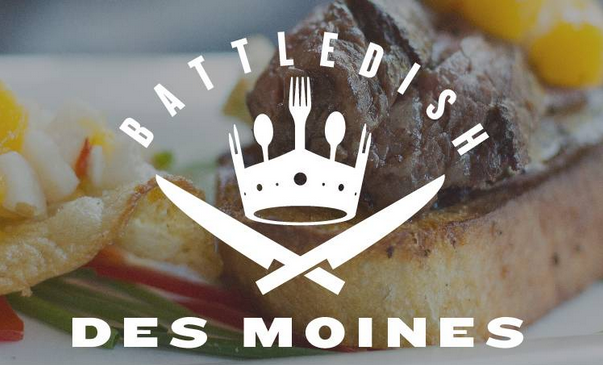 Well, the first ever BattleDish Des Moines has come to a conclusion. BattleDish featured 7 chefs and their restaurant all battling it out to be crowned the KING OF BATTLEDISH.

If there is a ‘foodster heaven’, I was there during BattleDish. Amazing dishes, drinks, and new friends.  I hope I can write a clear description of how much fun and tasty it was because when I tell my friends about the event I just smile and basically speechless.

We started with Sean and boy, did he set the stage. He “proofed” that we were in for a really good competition and amazing food and drink. His dish was a pork tenderloin with bacon-braised greens, and fried corn pudding on top. Yes, fried corn pudding.  A little golden nugget on topped oozed out a delicious flavor all over the pork tenderloin. Sean created a stellar cocktail that went well with the dish. I didn’t catch what was all in his Moroccan 95 but the sugar and salt rim was delicious. There were ton of layers, and spice to his drink. He had muddled some peppers which gave it the spice and paired well with the tequila. I’ll be back for some of those drinks for sure.

His cocktail that he prepared was a South American sangria with cachaca, absinthe, orange liquor, Mexican brandy, fresh fruit and topped with pino. This drink was lethal but delicious. He had this drink fermenting for over 72 hours.

I had met John at our DishCrawl BattleDish Preview party and he had me captivated with his skills right then. I knew that his BattleDish dish would be something out of this world. His dish was a surf and turf with braised short rib and a seared scallop. The meat was malbec-braised with a rye whiskey pan sauce and the seared scallop was cooked perfectly in a  lemone mulsion. I tell you what guys, this was killer. To serve a plate with ribs and NO knives says a lot about John’s confidence. The meat literally pulled apart and melted on your tongue. And now to the cocktail. Paired with our plate was a New York Sour. It’s built like a New Yorker – lots of layers and flavors. It had Sazerac rye, fresh lemon, simple syrup, and Bodegas Catena Zapata Alamos Malbec. We could’ve..would’ve.. stayed there all night drinking New York Sours but we had to get back to judging.

Fall has a flavor and it tastes like this — carrot puree, ginger and maple glazed parsnips, sweet potato’s, red onion and candid pecans. It was extremely creative and I loved all the flavors.

Don’t run in fear when you hear Nut Brown Ale. I’ve really fallen in love with IPA but I didn’t think I was going to be able to handle this beer but with the pizza it paired like peanut butter goes with jelly. ;).

Jeff was featuring mini smoked chicken tostadas and trying to win the most authentic. His tostadas consisted of slow simmered rojo, poblano sweet corn pico de gallo and jack cheese. It didn’t win my most authentic because it reminded me too much of a BBQ dish. Don’t get me wrong, it was still delicious! The cocktail though, oh lordy, was a delicious, sweet, melon margarita. I said that it reminded me of a lime Starburst jellybean (in a good way).

This was my first time trying braised Eden Farms Pork Belly. Basically it’s heaven on a plate. My favorite part on a pork chop is the nicely charred pork fat because it’s so full of flavor and it’s such a treat. Well, this is like that but EVEN BETTER. Grade A Farms Squash puree, charred Brussels sprouts shared the plate with the pork belly. The presentation was beautiful, too.

The cocktail we had was made by bartender Shannon Emerson. She created a Bourbon Street Beet. It consists of bourbon, beet juice, beets, ginger syrup, fresh lemon juice, and Peychaud’s Bitter. The drink was a little too bourbony for my liking but I had to keep up with my group ;).

Since Tacopocalypse is a ‘gourmet’ taco truck and restaurant, I thought this was a very creative dish. Sam did a great job creating a smoked miso ramen with andouille, hand made ramen noodles, soft poached egg, ssamchang, and house pickled vegetables. The vegetables were very refreshing.

Believe me, it was not easy deciding on our choices but I’d say we’re ready for the next judging event – CHOPPED (just kidding).

We better see you out at the next

Oct 12, 2013Nick Lucs
10 Items You Should Always Have On HandPumpkin Chai Snickerdoodles

No Corkage Fee – No Problem in Des Moines
4,068 views
Skip to toolbar