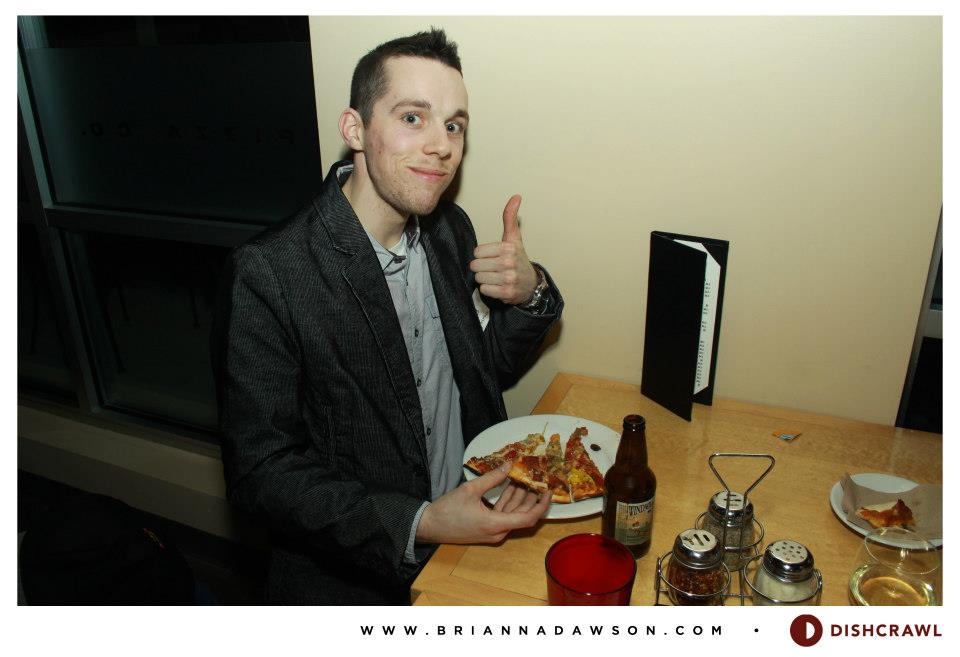 Last week I participated in the first ever Des Moines Dishcrawl. You can compare it to a bar crawl. We visited three different restaurants around the Sculpture Garden and had desserts catered in from a brand new, in-home bakery.

Our fist stop was at Gas Lamp, featuring Hole in the Wall. It was very interesting. We were in a dive-like bar and the chef from Hole in the Wall said we weren’t going to get the ‘normal’ bar food. That was very true. Our first meal of the night consisted of a couple small pieces of fruit, a crumble of cheese, and head cheese. Yes, head cheese. At first I didn’t realize what it was, until I talked to my table about what it was. Head cheese is a jellied meat dish usually made from the head of a pig or calf. I wasn’t too thrilled with the first spot, and I don’t think I would have chosen that as my first place. It made me question what the rest of the night would bring; it wasn’t a good first impression.

The second stop was Gusto Pizza. I had a feeling this would be much better than Hole in the Wall. I’ve been wanting to go to Gusto for a while. I was excited for this stop. One of the owners/managers stopped by each table and told us the background of Gusto and the family – which, by the way, owns quite a bit of Des Moines’ restaurants – as well as their plan on opening a new location out in West Des Moines.  They have really unique pizzas. My favorite that they served was the Spartacus: Red sauce, Graziano’s Italian sausage, pepperoni, mozzarella, banna peppers and cremini mushrooms. I’d definitely order that one again!

The last stop was at good ol’ Exile Brewery. I love this place. This was my favorite stop of the dishcrawl. It was my favorite becaue the meal that we got was amazing. We were served lamb sliders (feta, tzatziki sauce, red onion), German potato salad and a small green salad. The slider was out of this world, they have great burgers at Exile, but this may be my new thing to order. We had dessert catered in from a brand new, in-home bakery called Sweet Tooth Bakery. She had just opened up a few weeks before and Dishcrawl was one of her first caters. I thought that was awesome how Dishcrawl got Sweet Tooth involved.
All of that with a nice tall glass of Hannah brew, a Bavarian style Weissbier, was a great way to end the night.

I met some great people and hung out with them for the night. They gave me an insight on some new restaurants to try and some pointers on living in downtown Des Moines. Check out photos from the night taken by Brianna Dawson.

Overall, it was the first one, so it has some kinks to work out but I know Mandi will have the next Dishcrawl perfect. In fact, the next one is Tuesday, April 23rd in the East Village. That one should be great. Lots of great options over there. The only thing I would have changed is skipped Hole in the Wall – or made sure they served just ‘regular’ bar food.

All in all, it was awesome hanging out with other Des Moines Foodsters.