Fifteen months ago, the Iowa Brewers Guild approached me with the opportunity of a lifetime: the chance to spend five days in Denver, Colorado at the Great American Beer Festival. The chance to spend four sessions of pouring craft beers, talking craft beers, and partaking in everything an event of this magnitude has to offer, all while representing the Iowa Brewers Guild to help promote Iowa beer. The chance to try so much good new craft beer!? Who says no to that?

Certainly not I, dear reader.

So of course, I jumped on board the hype train early, absorbing every piece of information I could get my hands on. Held annually each fall since 1982 by the Brewers Association, the Great American Beer Festival (GABF) bills itself as the premier U.S. beer festival and competition. With 850+ breweries pouring 3,800 beers, it is undoubtedly the largest and most popular festival of its kind. In years past, some 60,000 tickets have sold out in just over an hour.

Prior to this year’s festival, however, one could not help but notice that the excitement and conversation around craft beer and its “premier” event had begun to shift:

For starters, the event took nearly four times as long to sell out than in years past. Granted, this meant six-plus hour sellout as opposed to under two hours, yet this drop still earned speculation that the craft beer bubble was about to burst. This also lead others to question if there was still a need for such festivals, leading to popular and respected online craft beer blogs like Good Beer Hunting to ask “Are Festivals Fatigued?”

Additionally, the Brewers Association introduced its “Independent Craft Brewer Seal” mere months before the Denver Convention Center doors opened on the first session. With this move, the BA planted its flag firmly with small independent brewers and effectively gave the boot to prior GABF stalwarts like Ballast Point and Goose Island. Cracks in the foundation of mammoth house that is GABF were beginning to show.

Participating in a beer festival of this size is a huge undertaking. While more established craft breweries with national distribution and limitless resources flaunt flashy endcaps and party buses, everything from choosing the beers to staffing the booth can create an unnecessary strain on smaller operations. With so many options available, it is easy for smaller breweries with less name recognition to get lost among the endless yellow-curtained rows. Breweries like most of those found throughout Iowa.

So is it still worth it?

Is it worth the investment (shipping, hotels, airfare, beer, and so many restaurant meals) it takes to have a successful showing? Or would brewers help themselves more by participating in localized events? Do the costs of attending a national festival outweigh the benefits? I reached out to a few Iowa brewers and industry folks to find out.

“This was our first year physically being in attendance at GABF.  What an experience for me and our team.  Our Head Brewer, Lead Brewer and Business Development Lead and myself spent the 3 days in Denver this year soaking it all in,” explains Dave Morgan, owner of Single Speed Brewing in Cedar Falls. “From a business point of view I’d say the greatest value came from exposing our team to all of the goodness that American Craft Beer has become.  The energy around the event was cool to feel, and for us to get an opportunity to see how breweries of different size, scale, focus, etc. participated and presented themselves was valuable.” 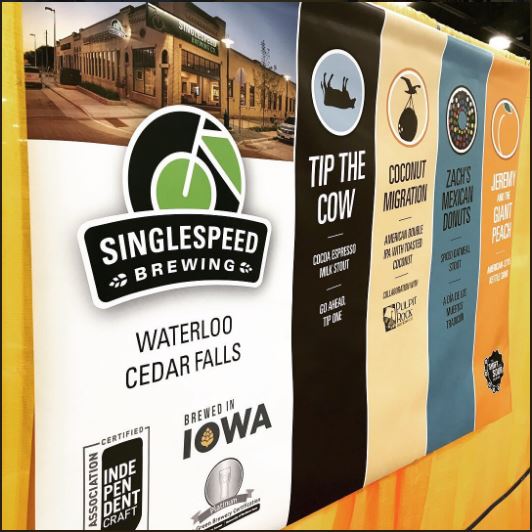 John Martin, head brewer of Confluence Brewing Company in Des Moines adds that “I always enjoy tasting what others are doing. It’s a source of inspiration. One strong impression I left with was that there are a lot of really tasty IPAs being made all over the country.”

I heard a very similar response from Quinton McClain, founder and head brewer of Lion Bridge Brewery in Cedar Rapids. “A trip to GABF can be seen as a reward to staff for helping make our brewery one of the premier breweries in the state. A trip to GABF is also a great way to see what’s innovative in an area that has one of the highest concentration of breweries in the country. Running a brewery can kind of keep me caged up at our location, and a fun work trip helps reset my brain and get me back in creative mode. It gets me excited again about new beers, ingredients, equipment, etc. Kind of makes me feel like I’m back in startup mode.”

“We haven’t committed to a booth at this point and I doubt we ever will,” Quinton later continued. “Lion Bridge probably won’t ever distribute beyond state lines, so I’m not sure it’s worth the expense and the need to staff the booth. The guild helps give us a bit of exposure which is great, and I’m happy with that.” Quick note here – the Support your Local Brewery Tent, i.e. Guild Pavilion, area of the festival provides state-level Brewers Guilds an area to showcase a wide variety of unique beers from their respective home states, otherwise not found throughout the festival. 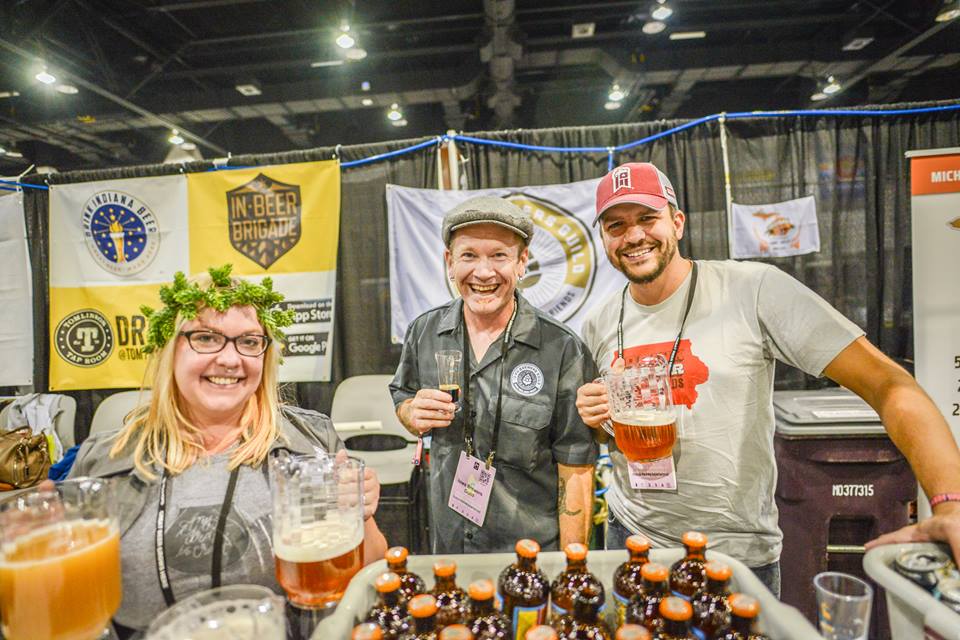 J Wilson, Iowa Brewers Guild President, had a few additional thoughts: “GABF wouldn’t be GABF without wide participation. It’s a real investment to have a booth on the floor…so it may not make sense for every brewery to participate in–certainly not year after year. But to do it just once for the small brewer has to be a dream come true to be on that stage. For other breweries with wider distribution or acclaim, participating must be figured in as a cost of doing business to stay competitive.”

“The Support Your Local Brewery Pavilion presents a happy medium for participation and brand exposure. We’ve met so many wonderful Iowans coming over to check out their home state’s brews. They’ve been astounded by our quality, and repeatedly pledged to return to visit their family sooner. We’re serving as ambassadors at that booth in so many ways–and it’s a blast to be a part of it on behalf of Iowa and Iowa beer.”

For thousands of craft beer fans across the country, a trip to GABF means the opportunity to sample high quality beer from many of their favorite they may otherwise not have access to all in one place. For brewers, not only is the festival a place for fan engagement and beer sharing, but it’s also a beer competition. Breweries enter their beers by style to be judged by the festival’s Professional Judge Panel in hopes of earning a coveted bronze, silver, or gold GABF medal. Winning would undoubtedly help catapult a budding brewery into new levels of success.

Why do you like @lionbridgebrew , people ask me. They're awesome people making killer beer, I respond. Congrats, Q and A! #iabeer

“Looking back on that message you asked if it was worth it to send beer…” Quinton continued, “I would say it’s definitely worth it. Winning for four medals in four years probably helps keep me more on the positive side of that question [because winning provides a] huge benefit. Even though I would say that the vast majority of craft drinkers don’t know or don’t care about GABF, with every win we get more cred for having consistent quality beer with a good shelf life, and we get a bump from a few newspaper articles and a surge in social media mentions. For brewers, a win at GABF or the World Beer Cup is like winning an Oscar for beer. Winning is a huge moral boost for the brewing team and all the brewery employees.”

However, winning isn’t everything, and not winning certainly doesn’t mean you don’t make amazing beer. The feedback provided by the judges panel can be worth the price of admission itself.

“The goal is obviously to bring home hardware.  You do that and the benefit is obvious,” added Dave. “This was our 2nd year of sending beers for judging and though we have yet to medal, we have been provided solid information from GABF judges in regards to how our entries rate, in particular within their chosen categories of entry.  World Beer Cup is just around the corner and our entries will again be in the mix.”

Finally, on a more personal level, spending five days in Denver at the center of the craft universe was the beer-trip of a lifetime.

Just the festival alone was epic. The Guild Pavilion was located conveniently between Melvin’s Party Bus and the Deschutes Woody Wagon, so foot traffic was off the charts. A majority of the folks that passed through the guild pavilion had some connection to Iowa, immediate family or otherwise, vowing to return to the state for a full pint after tasting the great beers we had to offer. 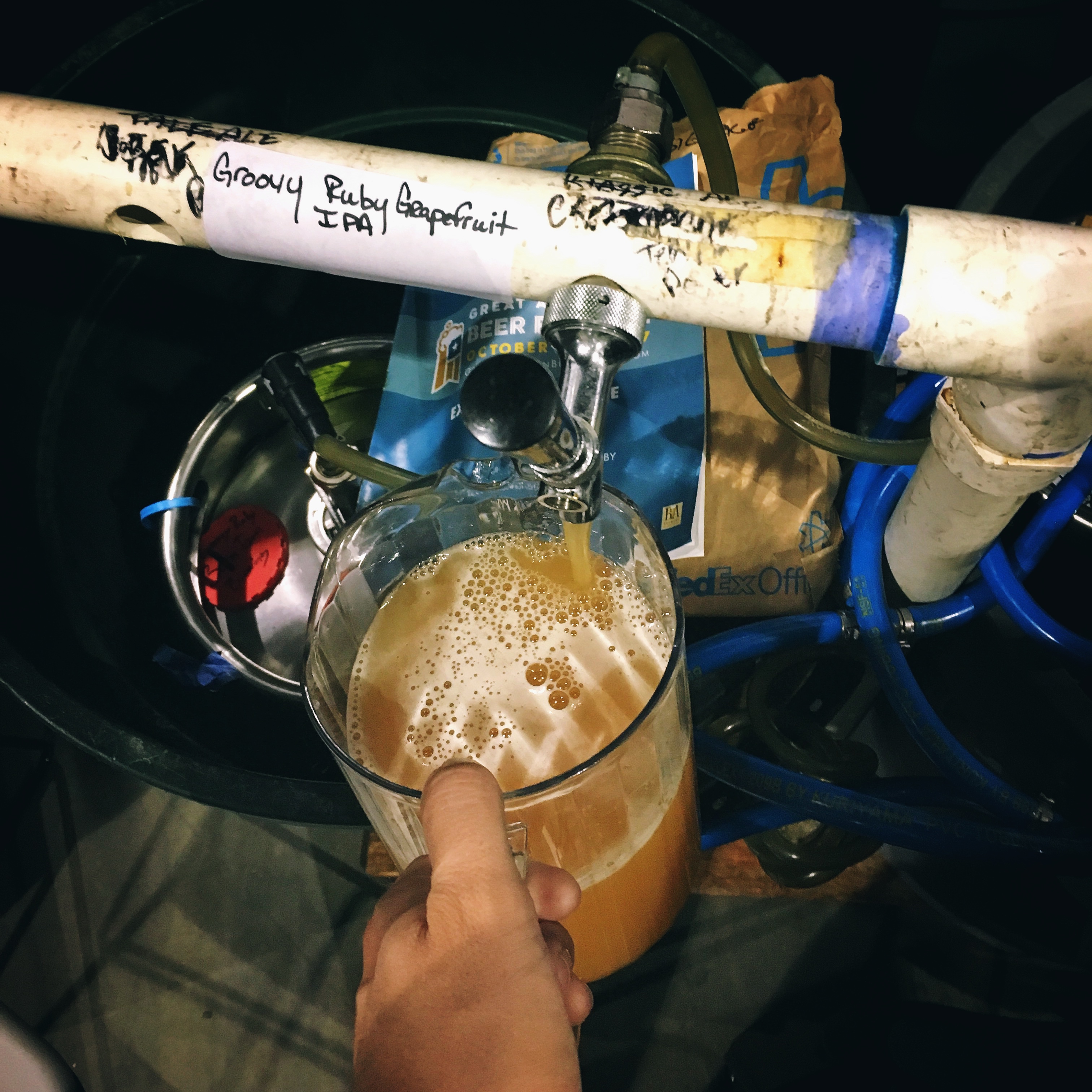 I cannot tell you how many eye-opening glasses of beer we poured, and to hear folks say “Wow, this is from Iowa?” was truly a rewarding experience in itself. “Virtuous Endeavor,” a 2015 Belgian Quad from Confluence became a best-kept secret throughout the beer festival, and Barn Town’s “Groovy Ruby” proved that the Midwest could brew a New England IPA that stood up to the rest of the style’s namesake brews.

Outside the convention center, there was something for everyone, From renowned Denver breweries, 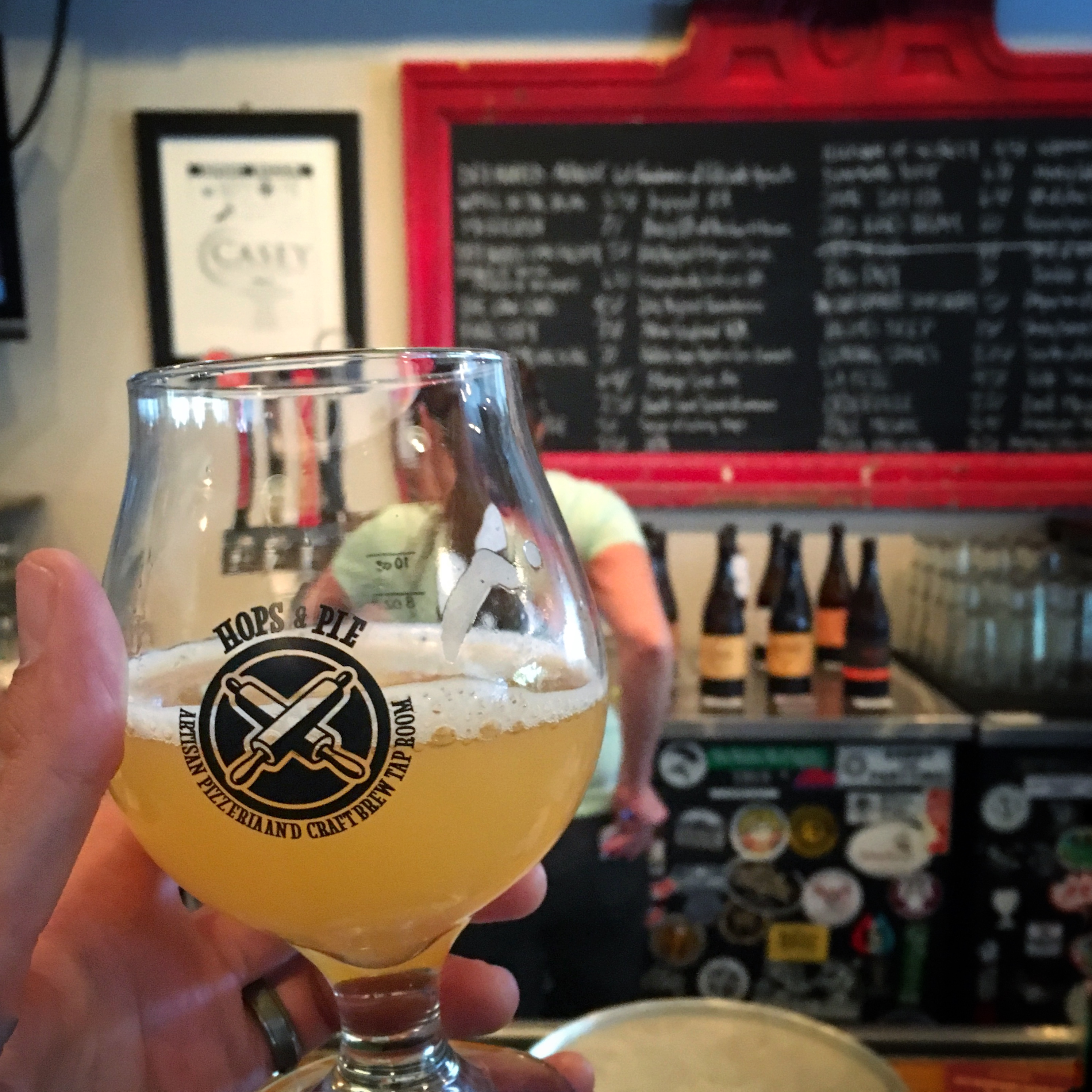 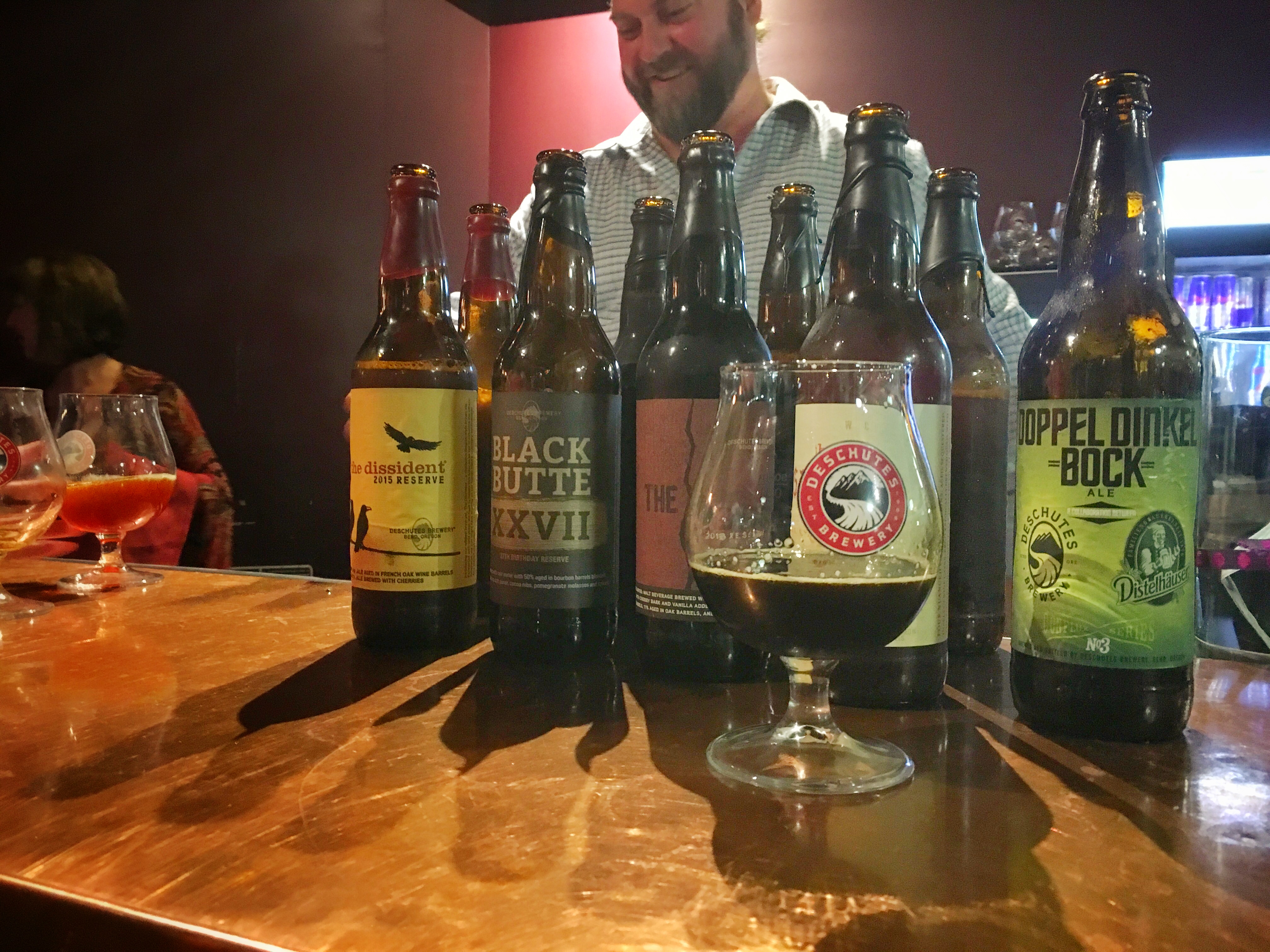 …and everything else in between…

…there were enough events to fill your calendar without even purchasing a ticket.

Make no mistake: craft beer is alive and well. Could some areas use an overhaul? Absolutely. However…despite the number of think pieces written and time spent debating whether or not GABF has run it’s course…rumors of its demise have (in my humble opinion) been greatly exaggerated.

I would highly recommend any craft beer enthusiast making the trip.

Jan 26, 2018Tom Hardinge
5 Winter Events in Des Moines To Add To The Calendar9 Places for Date Night on a Budget
Comments: 1